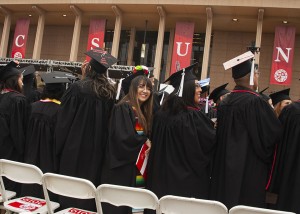 CSUN ranks second in the nation in awarding bachelor’s degrees to Hispanic students, according to the Hispanic Outlook on Education magazine, which focuses on Hispanic education in institutions of higher learning.

The magazine published the ranking in its annual Top 100 Colleges and Universities for Hispanics list in its October issue. The magazine ranks colleges and universities annually to track the national progress of Hispanic students in higher education and to recognize the institutions that are committed to serving their educational needs.

“I am very pleased that our university continues to maintain its high ranking on this list,” said Mary Beth Walker, provost and vice president for academic affairs. “CSUN is proud of the rich diversity of its student population, indeed, one of the most diverse in the country. We remain wholeheartedly committed to educational opportunity, inclusion, and excellence, and to supporting the success of students from traditionally underrepresented communities.”

Hispanic Outlook on Education also ranked CSUN 20th in the nation for the number of master’s degrees granted to Hispanic students. In addition, several CSUN programs ranked in the top 10 in degree categories, including:

CSUN is a designated Hispanic Serving Institution. As of fall 2021, 55% of its student population is Latinx.

Education, rankings, The Hispanic Outlook on Education’s Top 100 Colleges and Universities for Hispanic