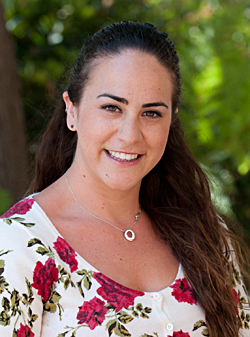 When Brooke Celia Hall was 17, she lost her father. Seven years later, her older brother died. While others might have given up and retreated from the world, Hall persevered through both losses.

The 26-year-old California State University, Northridge graduate student has developed a resolve that has spurred her success and inspired others. She was one of 23 students honored by the CSU Board of Trustees with the 2013 CSU Trustees’ Award for Outstanding Achievement at the trustees meeting in Long Beach on Sept. 24.

“I’ve had a lot of challenging experiences at a young age that have made me a more resilient person,” Hall said. “It is great to be recognized for my achievements.”

The students selected for the awards have demonstrated superior academic performance, personal accomplishments, community service and financial need. The scholarship awards range from $3,000 to $10,000. In addition, Hall has received the Trustee Emeritus Murray L. Galinson Scholar award for extraordinary public service. CSU trustee scholars are nominated by their campus president. Each campus selects one scholar.

“I am extremely proud that Brooke has not only received the CSU Trustees’ Award but she has received an additional recognition as the Dr. Murray L. Galinson Scholar,” said President Dianne F. Harrison. “Brooke’s confidence and continuous commitment to social justice make her an excellent representative of California State University, Northridge and the CSU system.”

Hall graduated with a bachelor’s in psychology from UC Berkeley in 2009. After working at a drug treatment facility for three years, she decided to pursue a master’s degree in social work at CSUN.

“I chose CSUN because it was conveniently located and it has an amazing program,” said Hall, a resident of Moorpark. “They (CSUN) teach a wide-array of topics…preparing you to work in a diverse community.”

Hall has interned at the Jewish Family Services in Ventura County, where she worked with diverse populations, including the homeless and children diagnosed with autism. She volunteers with Sober College, mentoring young adults struggling with drug addiction. She is a lifetime member of Psi Chi National Honors Society and has been accepted into Phi Alpha Honor Society for Social Work.

Hall said her goal is to become a licensed clinical social worker and to continue to provide a “sense of hope” to individuals who have experienced challenges in their lives.

“I want to be that person who can look beyond a person’s mistakes and instill hope,” Hall said.