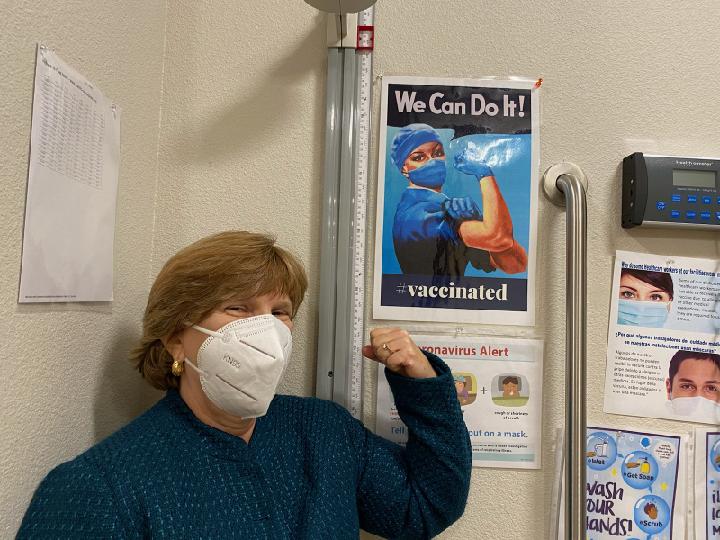 In late December, Terri Stratton’s eyes kept shifting to her email inbox, awaiting the message that would signal some good news during the long, exhausting fight against the virus that causes COVID-19.

Stratton ’78 (Health Science), MPH ’85 (Public Health), the chief executive officer of El Dorado Community Health Centers in Northern California, spent much of 2020 trying to deliver health care to thousands of individuals in her community amidst a pandemic that disrupted almost every aspect of American life. 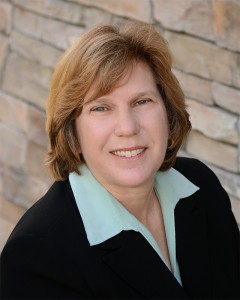 Now, COVID-19 cases were exploding again throughout California — positive tests in Stratton’s clinics rose from about five per week this summer to more than 60 some weeks in December — stretching hospitals and ICUs toward their breaking point.

On Dec. 23, the good news arrived, coming not in an email but a phone call. Her clinics’ supply of the vaccine had arrived.

“We’ve been working so hard,” Stratton said. “Everybody, including the public, is really tired and fatigued around COVID, but people in health care are really exhausted. This has been a very heavy burden for health care, and it continues to be so. It’s going to be up to all of us to really get us out of this pandemic, too.

“We’re all extremely excited about the vaccine, and see this as a light at the end of the tunnel.”

El Dorado Community Health Centers receive federal funds as a Federally Qualified Health Center, providing health care to underserved individuals who may not have health insurance. Many of Stratton’s patients work for hourly wages or are self-employed, meaning if they miss work, they miss paychecks — a disincentive to stay home even if they’re sick. Many also live in small homes with multiple relatives.

Getting the vaccine to these individuals will save lives.

The first vaccine doses marked for the El Dorado Community Health Centers arrived at the Marshall Medical Center in Placerville, the designated delivery site for the Moderna vaccine. It was enough doses for 140 staff — 14 vials, 10 doses per vial.

The emergency operations lead picked up the doses, which were split between the main El Dorado Community Health Center site in Placerville and another site in Cameron Park.

The vaccinations of staff started immediately. 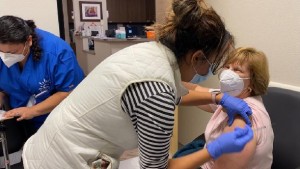 The centers’ employees got the first doses, giving them a measure of protection as they perform the high-risk, life-saving work of treating patients. Accounting for employees on leave and others who had been forced to quarantine, Stratton’s clinics completed the first round of the two-shot Moderna vaccine by early January. The second round of vaccines has already arrived and is expected to begin within the next week.

Stratton, who oversees five clinics and has been working on site for most of the pandemic, got one herself, then flexed beside a picture of a nurse drawn in a Rosie the Riveter pose.

Stratton, who grew up in San Bernardino, studied Public Health at CSUN because she liked the idea of the big-picture challenge of promoting health in communities. Her career has put her on the front lines of some of America’s biggest health challenges, and her work has undoubtedly helped save untold numbers of lives.

Starting her career and spending nearly three decades at the California Department of Public Health, Stratton helped craft policy and educate the public on issues such as non-smoking in public places, HIV/AIDS prevention, and domestic violence prevention after the O.J. Simpson trial. After Sept. 11, 2001, she helped develop and communicate strategies for emergency response to anthrax attacks and other public health threats.

Later, as a senior manager with the California Department of Health Care Services, Stratton helped develop policy and implement California’s Medi-Cal program. She also worked with California’s Health Benefit Exchange (Covered CA)  to build its marketing team before the launch of open enrollment in 2013.

April Roeseler, branch chief of the California Department of Public Health Tobacco Control program, worked with Stratton on smoking cessation initiatives including a statewide Quit Line call system that offered resources and support to those who wanted to quit smoking. Roeseler said she watched Stratton come up with evidence-based solutions to big problems, skillfully get buy-in from state officials reluctant to try expensive or controversial tactics, and make real impacts on public health.

“These were just all new things that took trailblazing, that took strong analysis, and she worked well with decision makers to convince them of the path that needed to be taken,” Roeseler said. “She’s been doing this for more than 30 years, so if anyone is qualified to put together a great vaccine distribution plan, it would be Terri.”

Stratton’s public health experience helped her recognize early on the seriousness of the COVID-19 threat right away, but nothing she’d seen matched the magnitude of the virus.

“This effort, and the urgency around it, is really unprecedented in my lifetime,” she said. “You’d have to go back in time and look at things like polio and smallpox and things like that to have some context there. But this is really a humongous effort, and I will say this effort is going to be driven by health care and public health.”

Planning for the future

On Jan. 13, Stratton received word that her clinics would receive 1,000 doses of the Pfizer-BioNTech COVID-19 vaccine. Next week, Stratton’s clinics will begin distributing the vaccine to individuals in the next tier of the Centers for Disease Control and Prevention’s distribution plan. This includes those who are age 75 or older, plus essential workers such as educators and those working in the food industries.

The most daunting challenge, Stratton said, will be convincing skeptical community members that the vaccine is necessary and safe. Her clinics have already begun public awareness communications including videos and social media posts; the next step will be to reach out to community organizations who have a level of trust with potentially skeptical individuals. Communicating an unpopular message is something Stratton has done before, as evidenced by her campaign to get people to quit smoking.

The vaccine distribution effort will actually be familiar ground for Stratton, echoing the efforts to provide H1N1 vaccines.

“It’s a little daunting, but, you know, I’ve done that before,” Stratton said. “I know what that looks like. I know we can do it.”