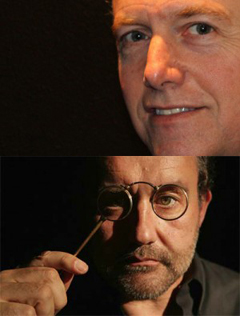 Launched by the university’s Mike Curb College of Arts, Media, and Communication in fall 2011, the Commerce of Creativity Distinguished Speaker Series aims to connect the campus and the San Fernando Valley business community with compelling and provocative storytellers who have made significant contributions to global business achievement.

As the youngest marketing executive in the history of Lockheed-Martin, Tom White ’78 — who was responsible for the promotion of all Lockheed products and programs worldwide — fits that bill . White went on to establish his own company, 3DI2, and set new standards for linking brand development to sales growth. Today, his impressive client list includes Fortune 500 companies as Motorola, Philips and Volvo.

White is the second of three invited presenters featured during the inaugural season of the Commerce of Creativity Distinguished Speaker Series. Many of the college’s programs, including those in art, music, theater, cinema and television arts and journalism, have an international reputation for graduating skilled professionals who have distinguished themselves in their respective fields.

“Cal State Northridge is committed to educating students who go on to successful careers in creative industries,” said Robert Bucker, dean of the Mike Curb College. “We are investing in their future leadership by exploring and celebrating the creative problem solving occurring right here in the Valley.”

The Commerce of Creativity series kicked off with a lecture by award-winning architect Kara Hill, who designed the university’s state-of-the-art Valley Performing Arts Center.

The third and final lecture features Oscar-nominated filmmaker Don Hahn ’75. Hahn has had a long and stellar career at Disney, including as producer for the landmark animated feature “Beauty and the Beast,” released in 1991, which made him the first producer in Hollywood to be nominated for a Best Picture Oscar for an animated film. His next production, “Lion King,” released in 1994, set worldwide box office records for an animated film and quickly became the highest grossing traditionally animated film in history.

For more: Commerce of Creativity Speaker Series to Explore the Secrets Behind Developing a Successful Brand [CSUN Media Releases]