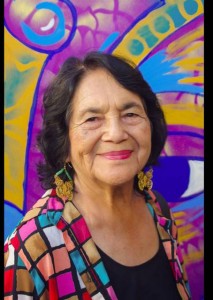 Dolores Huerta has made her mark on American history as a labor leader, a teacher and a champion of civil rights. She has taught generations of people how to organize and stand up for themselves. The fire within her that has sustained her work to help others continues to this day.

An upcoming event at The Soraya dedicated to the activist wants to show another side of Dolores Huerta–  one that listens to a variety of music from jazz to rancheras and loves to dance.  Huerta studied flamenco dance as a teenager. She said the highly expressive art form and guitar music that originated in Spain spoke to her. Growing up, she was exposed to different music genres.

“I love all kinds of music,” Huerta said. “I like classical music. When I was young I also played the violin and then my mother would always buy season tickets to the symphony.”

Huerta said she also got into jazz at an early age. As a teenager in Stockton, which is close to San Francisco, she took the opportunities to see Billie Holiday and Duke Ellington. She traveled around the Bay area and the Central Valley with friends to see her favorite artists.

On Sunday, Nov. 13, The Soraya will present “Concierto Para Dolores: A Musical Tribute to Dolores Huerta,” in honor of the 92-year-old. Show director Dan Guerrero has put together performances that represent Huerta’s favorite music including folk, R&B, mariachi, and of course, dance. Guerrero has also put some elements into the show that he doesn’t want to talk about too much– to surprise his long-time friend.

“Everyone will get to know her as a person and what drives her, and we’re doing it through music and dance,” Guerrero said. “They will see what kind of a friend she is and what kind of a mother she was and is,” he said. “She’s extremely accessible, it’s like meeting with your Tia, you know, she’s like a relative.”

Guerrero got his long-time friend to meet for an hour-and-a-half over Zoom– no easy feat, given Huerta’s busy travel and work schedule, so he and the production team at The Soraya could choose the music for the show.

“I asked, what were your favorite songs growing up? What is your favorite style of music or genre?” he said. “She does have a very wide and eclectic [taste in music.} She loved jazz and Charlie Parker and she loved Marvin Gaye and Billie Holiday and the dust bowl songs that Guthrie did and of course boleros and rancheras. So it’s a wide range.”

The cast of musicians for the concert include John Doe, La Marisoul, Gaby Moreno, Marilyn McCoo and Billy Davis Jr. and recent Grammy-Award-nominee David Aguilar. Mariachi Garibaldi de Jaime Cuéllar will also perform and the evening will be hosted by comedian Cristela Alonzo.

Huerta will attend the event with several members of her family. The mother of 11 will be introduced on stage by two of her daughters.

For Huerta, one hopes the concert will serve as a well-deserved respite from a non-stop schedule. She has been traveling in recent months to different states. In the last week, she’s been to Michigan, Nevada and Georgia for get out the vote efforts. Chicana/o Studies Professor Denise Sandoval is on the host committee that has helped plan this event. Sandoval says Huerta serves as a feminist icon as well as a civil rights hero.

“I feel like for CSUN to honor her, it’s really important, given the climate that we are in, where there are so many attacks on human rights, civil rights and even on women’s bodies,” Sandoval said. “These are the things that Dolores was working on in the ’60s and ’70s and the need for organized, sustained political movements is still needed today.”