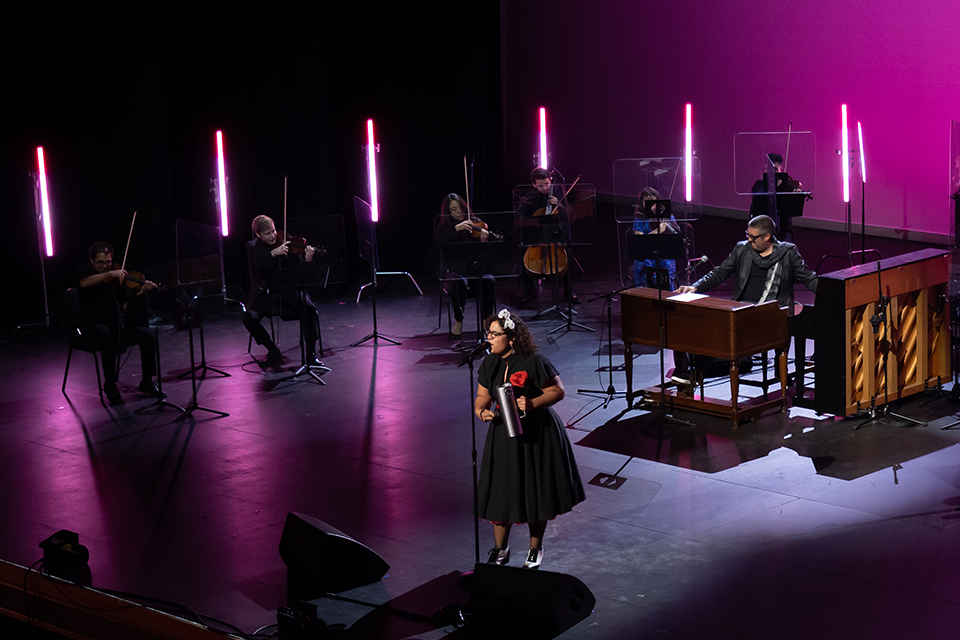 The CSUN Honors String Quartet backs up La Marisoul at The Soraya. Photo by Ricki Quinn (The Soraya).

Recorded in October live onstage at the Younes and Soraya Nazarian Center for the Performing Arts, “A Tribute to Linda Ronstadt at The Soraya” features a setlist of Ronstadt’s most iconic English and Spanish singles, including “Desperado,” “Por un Amor,” “Los Laureles,” “Silver Thread and Golden Needles,” and duets of “Rogaciano el Huapanguero” with Aida Cuevas and La Marisoul, and “Somewhere Out There” with La Marisoul and David Hidalgo.

The CSUN Honors String Quartet will accompany the band and fill in the string section for the performance of Ronstadt’s 1974 hit “You’re No Good.”

Students and musicians were required to go through rigorous COVID-19 testing, screening and safety protocols. 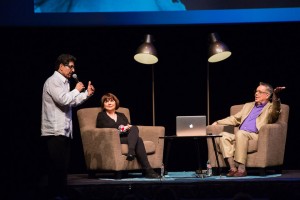 In 2015, Linda Ronstadt joined Fermín Herrera of CSUN’s Chicana/o Studies Department and Guerrero onstage for a discussion of her career at The Soraya (then known as the Valley Performing Arts Center. Photo by Luis Luque.

Ronstadt, who recently received The Legend Award from the Hispanic Heritage Foundation, will be featured in a recorded conversation with Cuevas and La Marisoul, who will share their thoughts about how Ronstadt influenced their careers and their musical journey. Ronstadt also shares with them about her family, culture and the diversity of her career.

“As part of the CSUN community, The Soraya continuously seeks opportunities to engage the campus community and make available unique learning opportunities for CSUN students,” said Carey Christensen, house manager of The Soraya. “Participating in this television production represented an incredible real-world learning experience for these students, and a wonderful opportunity for The Soraya to collaborate with the CSUN Department of Music on this production.”

Diane Roscetti, director and faculty coach of the CSUN Honors String Quartet program, said, “The students in this year’s ensemble are all advanced musicians with wonderful attitudes and work ethics.”

“After months of not playing with other people, let alone performing, due to the pandemic, it was incredibly refreshing to see and interact with other musicians,” Glass said. “I’m so grateful to The Soraya, CSUN and [production music director] Cheche Alara for this fantastic performance, and I am so excited to hear the final product.”

“A Tribute to Linda Ronstadt at The Soraya” will premiere at 8 p.m. on Wednesday, Nov. 18, on KCET, followed by an encore airing at 8 p.m. on Dec. 2 on KCET. The program will be available for streaming immediately following the broadcast at kcet.org/southlandsessions, as well as the free PBS mobile app.