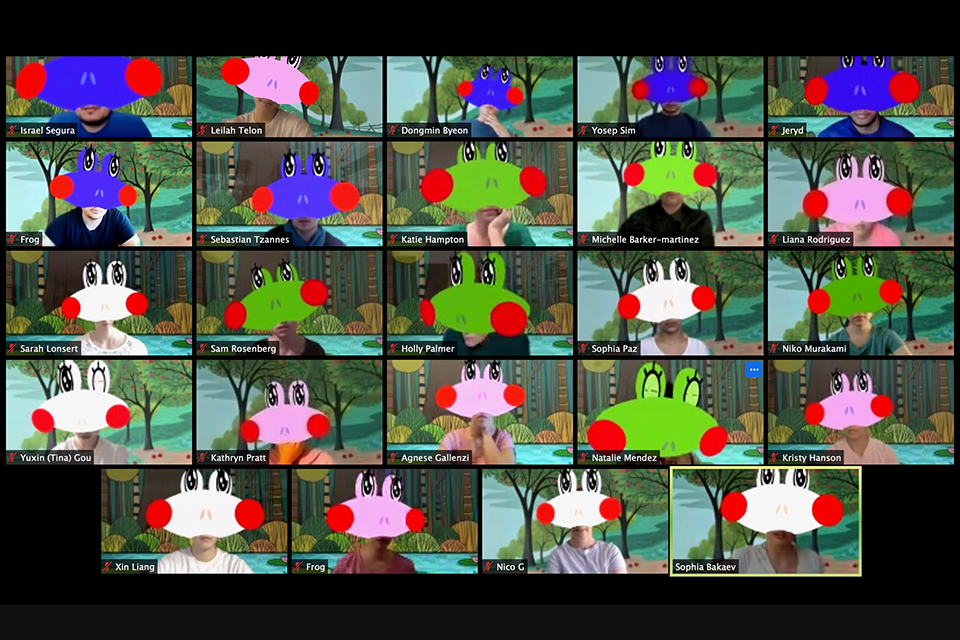 The CSUN Opera and Department of Art team up to bring opera characters to life with augmented reality lenses on Zoom. Photo courtesy of Mercedes Juan Musotto.

Over the past year, the CSUN Opera has ingeniously employed technology to present some of the most innovative opera performances for the CSUN community to enjoy from the comfort and safety of their homes during the pandemic.

On May 15-16, the CSUN Opera will showcase their newest effort — an online opera performance created with augmented reality (AR), which allowed the company to breathe new life into the characters of Maurice Ravel’s “L’enfant et les sortilèges.” The performance, pre-recorded via Zoom, will premiere on the CSUN Opera YouTube channel. The recorded livestream can also be watched after the premiere date on YouTube. 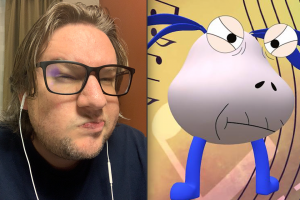 “When COVID hit, I thought that was the end of the opera at CSUN, [since] there was no way I could imagine producing a full opera remotely,” said professor Mercedes Juan Musotto, who served as the show’s music director and producer. “Then, I started researching augmented-reality software that we could use as an alternative for makeup, costumes and props, in a remote way. … It has been a great tool in times of isolation, and a fantastic way of teaching ourselves to find the way to make things happen even though it seems impossible at first.”Following their recent collaboration on the animated opera “Gianni Schicchi” earlier this month, Musotto and the CSUN Opera once again teamed up with animation students and faculty within the CSUN Department of Art.

The animation and design team, led by animation senior Anais Castellanos, used AR platform Snap Camera and collaborated with AR company Wild Portals to create various lenses that allowed performers to look like 3-D characters — in this production, animals, plants and furniture — on Zoom, similar to the Snapchat filters that give users animated features like oversized eyes or dog ears.

“It was great working with Anais and [3-D lens and modeling supervisor] Jose [Salas] to create all sorts of 3-D characters — from benches to squirrels to trees,” said animation student Madeleine Chiu. “It is really neat to see the actors and actresses transform the lenses into characters. … I am grateful to be a part of this unique and innovative project.” 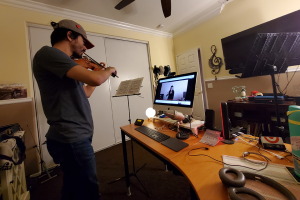 Violinist Ryan Porchas records his part in the symphony orchestra in his home studio. Photo courtesy of Mercedes Juan Musotto.

As they did with previous online opera performances, the CSUN Symphony recorded parts individually, with the help of the software Audacity and Musotto’s mock-up orchestra.

“CSUN Opera lives by the motto, ‘Making old opera new again,'” said Hugo Vera, director of vocal arts and opera at CSUN, the show’s director. “The world of augmented reality is something that has never been done in the world of opera. … Who knew that Snapchat/Camera can be used for more than having puppy ears?”