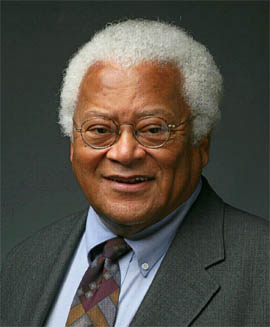 The story of American history in the 20th and 21st centuries can’t be written without Lawson, whose influence touches nearly every social justice movement of the past several decades. The Rev. Martin Luther King Jr. called Lawson “the leading theorist and strategist of nonviolence in the world.”

Lawson’s teachings and work with students were instrumental to several of the most high-profile protests of the 1960s in the U.S., including lunch counter sit-ins to end racial segregation, the Freedom Rides of 1961 and the Meredith March in 1966. He played a major role in the Memphis sanitation workers’ strike of 1968, which led to better wages and working conditions. King was in Memphis in support of this cause when he was assassinated.

Lawson’s ideas and leadership still resonate today. He plays an active role in labor movements and social justice fights, aligning with unions to fight for and model a more equitable and just society. Last year, Lawson spoke at the memorial for U.S. Rep. John Lewis (D-Georgia), one of the most important civil rights leaders of the 1960s, who participated in Lawson’s workshops on nonviolent struggle.

The NAACP recently honored Lawson with its prestigious NAACP Chairman’s Award during its 52nd Image Awards event. The award recognizes individuals who demonstrate exemplary public service and use their distinct platforms to create agents of change, according to the NAACP. Previous honorees include Lewis, then-Sen. Barack Obama, Congresswoman Maxine Waters, filmmaker Tyler Perry and U2 singer Bono.

Lawson said he was appreciative of the award, which he saw as a national endorsement of his methods.

“I’m more interested in what it means to a great number of the people in the Black community,” Lawson said. “It means that the oldest civil rights group in the nation acknowledges my work and life as a nonviolent organizer. More than the recognition of me, they’re recognizing the fact that the way in which I went about doing my work, the work I’ve done and am still doing, is on the right path.”

Lawson was recognized because his work continues to be an inspiration for those participating in ongoing protests for racial justice.

“Last summer, we saw millions around the world take to the streets in the most powerful protests for racial justice and civil rights in a generation. These protests were inspired by the work of civil rights movement leaders like Rev. James Lawson,” NAACP Chairman Leon W. Russell said in a statement. “In this pivotal moment for Black history, there is no better time to recognize Rev. Lawson’s tremendous contributions to American history and to live up to his example.”

Since 2010, Lawson has been involved with CSUN’s Civil Discourse & Social Change (CDSC) initiative, which combines education, community involvement and sustained activism to address issues of social justice and social change. His work with CSUN includes workshops and public lectures, and he still teaches a course on nonviolent struggles, civil rights and social change. The course, which is an upper-level communication studies class, covers the history, philosophy and methods of nonviolent social change, linking this knowledge with the ongoing fights for equity and justice.

Lawson’s knowledge and experience have deeply informed the work of the CDSC, said Kathryn Sorrells, a professor of communication studies who co-founded the initiative with Marta Lopez-Garza, professor of gender and women’s studies. The CDSC is now co-directed by Gender and Women’s Studies associate professor Khanum Shaikh and Asian American studies assistant professor Clement Lai.

“Reverend Lawson has served the CSUN community as a visionary civil rights leader, mentor, teacher and activist for over a decade,” Sorrells said. “He has consistently and courageously provided the CSUN community with the vision and blueprint for nonviolent social change, as our students struggle to realize their human potential amidst assaults on communities of color, divestment from public education, and increased visibility of the white supremacist underpinnings of U.S. society. His leadership has been a vital force in envisioning and sustaining CDSC.”

CSUN students and alumni have carried Lawson’s teachings into the world.

“Learning from him meant a once-in-a-lifetime opportunity,” said Gómez-Becerra, who is now an assistant professor of Spanish at Eastern Kentucky University. “It meant learning about history from a historical figure. It meant being closer to the struggles and victories of the past, and having the opportunity to draw connections with efforts and movements that work to eradicate systems of oppression in the present. It meant to bring back in full circle the pain and joy of fighting for social justice and a just humanity.

“My experience from working closely with Rev. Lawson taught me to face the struggles in grace, peace and confidence,” Gómez-Becerra continued. “I learned from him that there is a force more powerful; that is the strength in the conviction that what we stand for is just and right. Learning about the power in trusting one another and having faith by seeing others through our own hearts gave me the patience to deal with internal struggles, and the hardships that come when witnessing social injustices and oppression. This piece of teaching has been impactful in everything I do.”

While many of Lawson’s former students have carried on his tradition of nonviolent protests, for others, his teachings manifest in a change of thinking and the way they carry themselves in the world.

“For each student, the most important development is for them to recognize that if they want a world where there are no racists, then they emerge as a young adult, a maturing adult, they have to move their own life to be a non-racist life,” Lawson said. “On the positive side, they have to move their living and their working to reflect compassion, and love, and beauty for all the people in the world, beginning with their own friends and family and intimate and extended family, people they work with. That, I think, is the most important element, how each person uses their gift of life to be on the side of truth.”