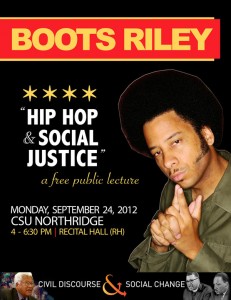 Flyer for the Boots Riley lecture.

This is a rapidly changing world for students, and communication studies professor Katheryn Sorrells is trying to create more leaders to guide it. For the past three years, she and her fellow faculty members have been using CSUN’s Civil Discourse & Social Change Initiative to move students into action. One way is to hold forums and events, such as bringing hip-hop lecturer Boots Riley in on Monday, Sept. 24, as part of a series Sorrells hopes will collectively make a difference in the long run, in addition to informing and entertaining.

“We have lectures and events like the ‘Hip Hop & Social Justice’ event,” Sorrells noted, “and we also work with student organizations to help give them direction and teach them a bit more about how to organize … (and) how to be more effective leaders for social change.” Along with other members of the CSUN faculty, Reverend James Lawson, the 84-year-old former strategist for Martin Luther King Jr., helps Sorrells educate and guide the students. He’s been with the group since its inception three years ago and is organizing the students at CSUN just as he did when working with MLK more than 40 years ago.

Riley is a perfect compliment to their initiative. For the past 20 years he’s been on the hip-hop touring circuit, starting out in the early ’90s in The Coup, a collective out of Oakland that was outspoken about rights and positivity in hip-hop and urban communities. Communication studies professor Gina Giotta was instrumental in bringing Riley to the university, and Sorrells believes he’s the right person to bring their message to their audience.

“He’s going to tell his personal stories of how he moved from a place of feeling disempowered into feeling empowered,” she said. “His avenue was through hip-hop, but not everybody’s avenue will be through hip-hop… (but) it certainly resonates with a huge youth community.” It’s a community that the initiative hopes to reach CSUN and beyond, because Sorrells and Lawson feel that it needs the guidance they provide help with.

“(Rev. Lawson) says frequently there’s actually more activism going on today than there was during the civil rights movement,” Sorrells said, “but the issue is that it’s not sustained and it’s not focused. So there’s a huge potential, and part of what it tells me is that we need more leadership.

“I think students will find it beneficial to have guidance, and also just knowing there’s a larger community there to support them if they want to make something happen.”