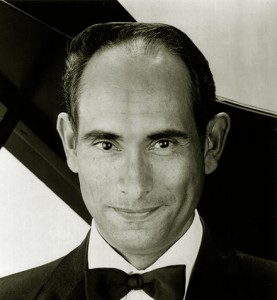 When you ask most people about composers from the last century, you’ll most likely get mentions of Debussy, Bernstein or Copland. Ask CSUN Professor Emeritus and piano virtuoso Charles Fierro, however, and the answer will be Paul Hindemith—a composer Fierro has been passionate about since he began learning his craft.

Now in his 70s, Fierro is sharing his love of Hindemith’s “Ludus Tonalis” by performing the work in its entirety all across the land. On Saturday, Sept. 22, he’s bringing it to CSUN—the campus where he worked for 30 years, from 1970 to 2000.

“I play the ‘Ludus Tonalis’ because I love it and because it is a great work, one of the most significant in 20th century piano repertories,” Fierro noted. He said he was excited about the performance because it is the first time he will be playing it on campus.

Fierro’s first encounter with Hindemith’s music occurred when Fierro was a student at USC more than 50 years ago. He only needed a few notes to understand what the composer was capable of. Hindemith, who fled Hilter’s grasp in Europe for America, was well known then, working with the likes of playwrights Bertold Brecht and Thornton Wilder. But it was Hindemith’s solo works—specifically 1942’s “Tonalis”—that grabbed Fierro in a way he couldn’t forget, driving him to play the composition any chance he got.

“Indeed, at my very first recital, I played some pieces from it,” he remembered. “(N)ow, finally, I’m playing the whole thing five times this year.” Fierro is currently touring the country performing “Tonalis” and is looking forward to recording the work and its three piano sonatas soon.

“I’m playing it six times this year and will do so several times next year, as well,” Fierro noted. “(Next year) is the 50th anniversary since Hindemith died, (and) I am actively seeking confirmed dates and venues for these performances, including the National Gallery of Art in Washington, D.C., as well as at numerous universities and conservatories in the U.S.

“My health is excellent,” he assured, “and I plan to increase concertizing for many years to come.”