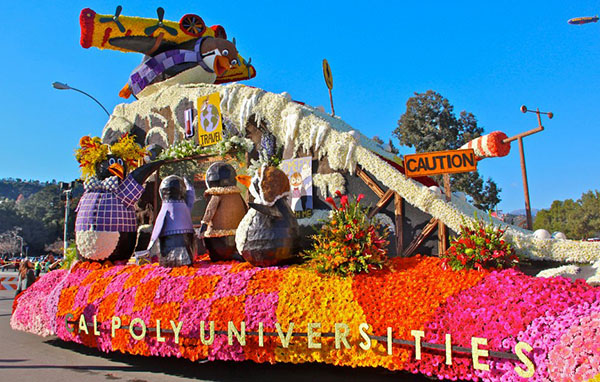 Since 1949, students at Cal Poly Pomona and Cal Poly San Luis Obispo have teamed up to build a float for Pasadena’s annual Rose Parade. Last week’s parade marked the 51st time in 65 years the student-built float was recognized as one of the best.

This year’s float, “Tuxedo Air” captured the Bob Hope Humor Award for most comical and amusing entry. It conveyed the 2013 parade theme of “Oh, the Places You’ll Go!” through the depiction of adventurous penguins learning to fly with the hope of reaching warmer and more exotic lands.

Made with flowers grown on both Cal Poly campuses and throughout California, “Tuxedo Air” was also certified as one of only two “California Grown” floats in the parade.

While most of the Rose Parade’s floats are constructed by corporations, the Cal Poly float exhibits the universities’ signature “Learn by Doing” approach—it’s designed and built by the students themselves.

From start to finish, the float building project takes an entire year. It all begins each February with a concept contest, says Cal Poly San Luis Obispo mechanical engineering major Michelle Kaye, who has worked on the float for the past three years.

“Once a design is selected, half of the float is constructed at each campus. As it gets closer to the new year, we bring them together at Cal Poly Pomona,” Kaye said. “We work closely together. In fact, many of us come down to Pomona every weekend at that point.”

In the days leading up to the parade, extra volunteers including Cal Poly alumni and community members lend a hand putting everything together.

The construction also gives Cal Poly students a chance to flaunt their skills in mechanics and engineering. Throughout the float’s history, it has introduced innovations for the parade such as computer controlled animation, use of hydraulic systems for movement, and front wheel drive.

But the build also gives other volunteers the opportunity to learn new skills. Kaye says no experience is required to volunteer.

“We have business majors that come in and want to learn how to weld,” Kaye said. “Everyone is welcome to take part in the team effort.”

More pictures of the float-building process and the final product, “Tuxedo Air,” can be found on the Cal Poly Rose Float’s Facebook page.