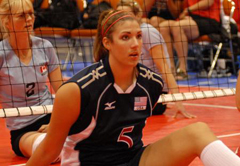 Perseverance is nothing new to Katie Holloway. After losing her left foot early in life due to an anklebone missing since birth, she was still able to garner a basketball scholarship and come to CSUN. Her career was nothing short of remarkable, capturing All-Big West Conference honors multiple times while simultaneously becoming the only woman ever to play Division I basketball with a prosthesis. You would think she would end her athletic career after graduating, but that’s where you’d be wrong.

That’s because Holloway is looking for one of the most prized trophies– a gold medal. Part of the Women’s Team USA Sitting Volleyball squad, she is headed to London for this year’s Paralympics. Holloway is hoping it doesn’t end with a silver medal like it did during her last go-round in the 2008 Beijing games.

“I think my whole perspective has really changed in the four years between games,” Holloway said. “Today, I am much more familiar with the Paralympics and have friends competing in a host of events… For our competition, I think I have a more serious mentality, and that has made it much easier to focus on what we need to do to be successful.”