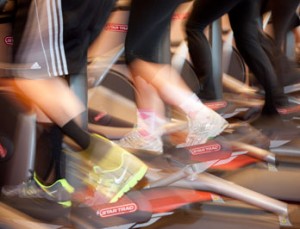 On the right track to health.

In collaboration with the city of San Fernando, Loy and his students developed “100 Citizens,” an innovative, multigenerational wellness program that asks parents and grandparents to exercise and eat better and thereby teach their children by example. Loy’s team spent more than a year working with San Fernando recreation officials to design a free, ongoing fitness program that would dispel the misconception that one has to join a fitness center or be a serious athlete to stay healthy.

“(Y)ou don’t have to have a lot of money or gimmicks to help people achieve healthier lifestyles,” said Loy. “It’s as simple as using the resources we already have: the knowledge and wherewithal of kinesiology faculty and students at local universities or colleges and the cooperation of local park and public health officials.”

When First Lady Michelle Obama’s “Let’s Move!” campaign invited communities to share their stories of efforts to combat childhood obesity, the collaborative submitted a three-minute video documentary, “100 Citizens: Role Models for the Future.” The video went on to win the national competition’s Popular Choice Award, receiving the highest number of online votes from the public.