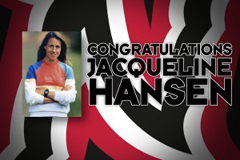 In 1973, an undergrad for CSUN ran the one of the most prestigious marathons in the world and changed the world of track. That CSUN spitfire, Jacki Hanson, won the Boston Marathon.

Now 39 years later, after a career of training under one of the best coaches in the world and breaking a few records, Hanson is heading to the National Distance Running Hall of Fame.

“I was just so happy and honored,” said Hansen, a 1974 graduate of Cal State Northridge. “It was such a great honor knowing that the nomination process and the voting was conducted by my peers.”

Doris Brown Heritage, the preeminent female runner in her day, nominated Hansen — and it’s not hard to see why. In 1974 and 1975, Hansen was the best female runner in the world, at two separate points holding the world record. She also won 11 of her first 12 marathons, a boggling feat even today. She also lobbied the International Olympic Committee to add the women’s marathon, and later the 5,000 meters and the 10,000 meters, to the Olympic Games at a time when young women had little or no opportunity to compete in athletics. It’s clear what she meant for the sport, then and now.

“The requirements for selection into the Hall of Fame are that candidates have had a significant impact on distance running in America,” wrote Hall of Fame Executive Director Timothy R. Reed. “Inductees are nominated and elected primarily by the current members of the Hall of Fame; you should be proud.”