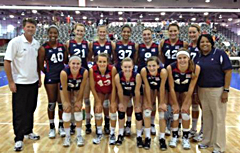 Jeff Stork has ben nothing but exemplary during his 10-year run as the head coach of the CSUN women’s volleyball team. He is only the third coach to notch 100 wins here, and under his watch, two Matadors have earned All-Big West honors under Stork while 28 Cal State Northridge student-athletes have garnered all-academic consideration. He also has two Olympic medals — one gold, another bronze — as a member of the ’88 and ’92 U.S. men’s volleyball team.

That’s why he was selected to shape this year’s women’s team before it’s set to head off to London. He is one of eight coaches sent to Ohio Dominican University in Columbus, Ohio, to see what the 48 invitees to the U.S. Women’s National A2 Team Program could do to make it on the final roster of 12.

“It was a privilege and an honor to participate in the USAV A2 Program,” said Stork. “We are currently rated number one of the world in women’s volleyball, and programs like USAV A2 are a stepping stone to being on the podium in future Olympics.”