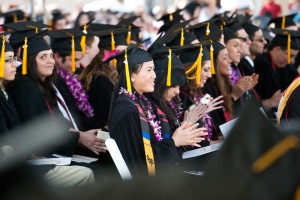 The CSUN Class of 2012 will have amazing speakers at their graduation. Photo by Lee Choo.

More than 9,000 students were eligible to take part in the ceremonies beginning with the university’s Honor Convocation on Monday, May 21, and continuing over the next three days.

Mieliwocki, who received her credential in secondary English education from Northridge in 1996, will address the graduates from the Michael D. Eisner College of Education on Thursday, May 24. The seventh-grade English teacher at Luther Burbank Middle School in the Burbank Unified School District was one of California’s five 2012 Teachers of the Year. She was subsequently named 2012 National Teacher of the Year, the nation’s oldest and most prestigious teaching honor.

Nicholas Timinskas earned a bachelor’s degree from CSUN in 2009. He will address graduates of the College of Engineering and Computer Science. Timinskas is global commercial operations information systems portfolio manager and project manager for breakawayfromcancer.com, founded by Amgen in 2005.

Telecommunications entrepreneur Paul Jennings, who graduated from Northridge with a degree in marketing in 1985, will speak during the ceremony for the College of Business and Economics. Business executive and former U.S. Census Bureau Director Vincent Barabba, who earned his bachelor’s degree at what was then San Fernando Valley State College in 1962, will receive an honorary doctor of laws degree during the same ceremony.

For more: National Teacher of the Year, Business Leaders Among Those to Address Cal State Northridge’s Class of 2012 [CSUN Media Releases]