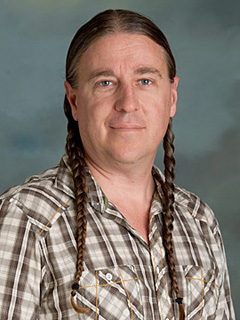 CSUN professor Brian Burkhart is giving some students a chance – the same one he almost lost. Photo by Lee Choo.

CSUN American Indian Studies professor Brian Burkhart could have been another cautionary tale told on the reservation. Such talent and promised, wasted. That was the path he was heading down when he dropped out of college after his first semester, citing how unprepared he really was. But then something happened to Burkhardt on his way to leaving his scholarly life. At some point, he got the “sheer will” to go on.

Burkhart, who is half-Cherokee and lived most of his adolescent life growing up on the Navajo Nation in Arizona, had a hard time adjusting to college. A lot of Native Americans do –– 50 percent drop out within the first year. Burkhart joined the National Guard and traveled the country making his living as a musician on the powwow circuit. Then something called him back to school.

“I started back at the lowest of the remedial classes,” he said. “But that only made me more motivated and focused on succeeding.”

That focus brought him to Northern Colorado University to receive his two undergraduate degrees and then Indiana University, Bloomington to get his doctorate in philosophy. Now he’s teaching at CSUN helping to define a generation’s view of themselves.

“Students come to (me) with issues of identity, trying to discover who they are and how they relate to that,” Burkhart said. He can’t imagine a higher purpose than helping American Indian students grappling with those essential questions.