On Feb. 28, Beatrice Weingart—a 100-year-old California State University, Northridge alumna—returned to campus to speak to a classroom of students studying the sociology of aging. Weingart shared stories of her experiences through the major historical events of the 20th century and her thoughts on aging in the 21st.

While sharing her life story, Weingart’s key message to students was that there really is no such thing as old age. “I feel that old age is in the mind,” said Weingart. “If you don’t feel old, you won’t be old.”

Helen Dosik, professor of the sociology of aging class, asked Weingart to speak because Dosik wanted to challenge her students’ preconceived notions of aging. “I wanted to introduce our young undergraduates, a generation who believe that age 30 is senescence, to a vibrant, energetic and involved 100-year-old in order to dispel negative stereotypes of older people,” she said.

Many of the students in the sociology of aging class are pursuing degrees in social welfare or healthcare. With the increasing aging of America’s population, care for older adults will likely be central to their careers. “I hope to encourage them to pursue their calling in gerontology, where they have the opportunity to address the social, psychological and biological aspects of aging,” said Dosik. 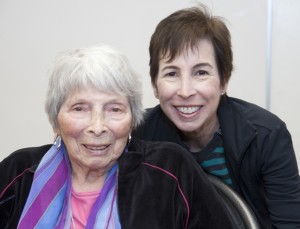 Beatrice Weingart and her daughter. Photo by Nestor Garcia.

Weingart was born in New York in 1912 and recalled a pastoral childhood with time spent outside collecting animals, much to the chagrin of her mother. She attended New Utrecht High School in Brooklyn, which at the time was the largest high school in the world with over 10,000 students. After high school, Weingart went to Cornell to study science, where she was one of a small group of female students and one of only a few studying the sciences.

Undeterred by merciless taunting and sexism, Weingart continued her education with humor and chutzpah, going on to become a bacteriologist, a very new field at the time. After working as a bacteriologist in New York City for several years, Weingart moved to Los Angeles with her husband when the Navy transferred him to the city shortly after World War II.

In Los Angeles, Weingart brought her love of science to the classroom after earning a master’s in science education at CSUN in 1961. Weingart went on to teach middle and high school science, with a lab approach that emphasized hands-on learning, something that wasn’t usually encouraged for young students in that era.

After Weingart’s talk, students peppered her with questions about her experiences and day-to-day life as an independent 100-year-old woman. She encouraged them to follow in her footsteps of defying convention. “You’re all capable of doing a lot more than is expected of you,” she said.