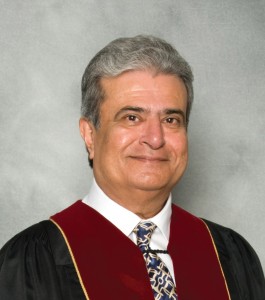 California State University, Northridge will confer an honorary doctor of science degree on Asad M. Madni for his pioneering research and achievements in science, engineering and technology.

Madni, who served as president, chief operating officer and chief technology officer of Sylmar-based BEI Technologies, Inc., will receive his degree on Wednesday, May 22, during the commencement ceremony for CSUN’s College of Engineering and Computer Science.

“The university is proud to recognize Dr. Madni with this honorary degree for his contributions to CSUN and for his professional and technical accomplishments in science, engineering and technology that have had a major impact on the lives of millions of people throughout the world,” said Cal State Northridge President Dianne F. Harrison. “He has been a strong supporter of the university, particularly in engaging with our students and engineering programs. CSUN’s students have benefited greatly from his time, expertise and example through his diverse experiences as an engineer, entrepreneur and engaged member of the community.”

Madni said he was honored to receive the degree.

“Over two decades, my relationship with CSUN in guiding graduate research and mentoring students and faculty has been truly fulfilling and memorable,” Madni said. “I am most grateful and truly humbled by this recognition.”

Madni served as president, chief operating officer and chief technology officer of BEI from 1992 until his retirement in 2006. He led the development and commercialization of intelligent microsensors and systems for aerospace, military, commercial and transportation industries, including the Extremely Slow Motion Servo Control System for the Hubble Space Telescope’s Star Selector System, which provided the Hubble with unprecedented accuracy and stability, resulting in truly remarkable images that have enhanced our understanding of the universe; and the revolutionary MEMS GyroChip® technology, which is used worldwide for Electronic Stability Control and Rollover Protection in passenger vehicles, saving millions of lives every year.

Prior to joining BEI, Madni was with Systron Donner Corporation for 18 years in senior technical and executive positions, eventually becoming chairman, president and chief executive officer. While with Systron, he made seminal and pioneering contributions in the development of radio frequency and microwave systems and instrumentation.

He is the recipient of numerous national and international awards and honors, including the 2012 Institute of Electrical and Electronic Engineers (IEEE) Aerospace and Electronic Systems Society Pioneer Award “for seminal and pioneering contributions to the development and commercialization of aerospace and electronic systems,” the 2010 IEEE Instrumentation and Measurement Society’s Career Excellence Award, the 2010 UCLA Lifetime Contribution Award and the 2004 UCLA Alumnus of the Year Award.

In 2011, Madni was elected to the U.S. National Academy of Engineering (the highest distinction awarded to an engineer in the US) “for contributions to development and commercialization of sensors and systems for aerospace and automotive safety.”

California State University, Northridge has more than 36,000 full- and part-time students and offers undergraduate degrees in 63 disciplines, graduate degrees in 57 fields, doctorates in education and physical therapy and a variety of credential and certificate programs.

Founded in 1958, CSUN is among the largest single-campus universities in the nation and the only four-year public university in the San Fernando Valley. The university is home to dozens of nationally recognized programs where students gain valuable hands-on experience working alongside faculty and industry professionals, whether in the sciences, health care and engineering or education, political science, the arts and the social sciences. While regionally focused, the university’s faculty and administrators recognize the important role CSUN students and alumni play in shaping the future of the state and the nation.