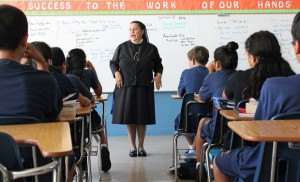 For many students, walking onto a college campus doesn’t mean they have it all figured out. Plenty don’t know what they’re going to major in, much less what they want to be when they graduate. For CSUN alumna Francina Vivier ’87 (Chicana/o Studies), a moment of clarity came after she found her first job at Saint Sebastian School, a Catholic academy in Los Angeles that serves preschool to eighth-grade students of diverse socio-economic, cultural and racial backgrounds. It was there that she was introduced to her true calling in life — being Sister Francina Vivier.

Soon after Vivier began teaching at the small school, she met the Saint Sebastian’s  Sisters Servants of the Blessed Sacrament. During her college years, she worked at an elementary school where teachers viewed educating as only a job. The Sisters, however, had a passion for the work that infected the recent graduate. Vivier went with them to retreats where she began to question not only her place in the world but also how and why these women came to their decision to devote their lives to one cause.

“I do this because it’s my job,” she said to Daily Sundial student reporter Jorge Neri about her outlook on teaching. “I get a paycheck — they don’t.” Vivier continued on her journey, one aimed at trying to help the community she grew up in.

“My commitment to social justice is because of my experience in college,” she said. “And (I) have been able to embrace and fully understand social justice within the church…”