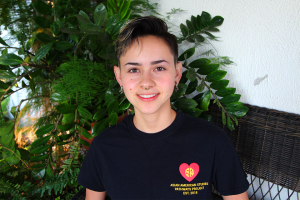 “Freshman year was the hardest transitional period of my life,” Jessica Steiner said.

Struggling with self-confidence and unsure of her career path, the CSUN student felt so overwhelmed and isolated that she’d retreat to her car to eat lunch alone. By the second semester, with no support system and her grades dropping, she stopped going to several of her classes.

Steiner said her college experience took a different turn in her sophomore year when she met the members of the Asian American Studies Pathways Project — a student retention initiative designed to address the unique issues of Asian, Pacific Islander and Desi American (APIDA) students. As she began studying and attending events with them, she moved from isolation to community and took a job as an intern with the Pathways Project.

“I felt like I was suddenly seen and understood, in a space grounded by a shared Asian American identity,” said Steiner, whose mother is Filipino and father is white. Now a senior majoring in anthropology and Asian American studies, she also served on the university’s Commission for Equity and Diversity and as a student lead in CSUN’s NASA-sponsored Autonomy Research Center for STEAHM, which supports underserved students pursuing science, technology, engineering, arts, humanities and math. She has remained staunchly dedicated to helping other APIDA students put down roots at CSUN.

“We know from higher education research that a sense of connection to your campus is one of the major factors for APIDA student success and retention,” said Tracy Lachica Buenavista, professor of Asian American studies, and Pathways Project founder and co-principal investigator. “Feeling like you’re part of a community, having students to study with, engaging in extracurricular activities — they all contribute to academic persistence. At the core of our program is pure mentoring, student interns who empathize with the experiences of fellow APIDA students and help them find belonging.”

The Myth of a Monolith

At the time, CSUN’s APIDA undergraduate enrollment was higher than 10%, earning the university the federal designation of Asian American Native American Pacific Islander-Serving Institution (AANAPISI). Yet when Buenavista and her Asian American studies (AAS) colleagues applied for an AANAPISI grant from the federal government, their project missed being funded by mere points. The reason? Despite the high population of APIDA students, it was difficult to demonstrate CSUN’s capacity to serve these students because there was no APIDA-centered program on campus to serve them. Buenavista, along with AAS faculty Clement Lai and Gina Masequesmay, applied for funding from CSUN’s Campus Quality Fee, and the first APIDA initiative on campus was born.

“The inaccurate assumption that all Asian Americans and Pacific Islander students have no issues and experience universal academic success — the ‘model minority myth’ — causes APIDA students to be overlooked in higher education,” said Buenavista. “We are painted as one big monolith, but we are comprised of more than 50 diverse ethnic groups, each with a different language, history, immigration pattern, socioeconomic status and persistent equity gaps in education.” 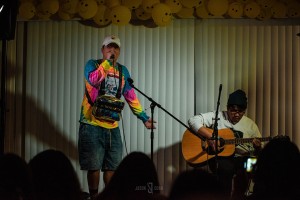 While the house has been quiet during the pandemic, the team has never been busier: Last year, the project helped more than 570 students find connection and community. In the aftermath of the Atlanta spa shooting in which six Asian women were murdered, the group’s social media account interaction increased by a staggering 371 percent. Interns were called upon to provide support and participate in online healing spaces and teach-ins about the roots of Anti-Asian violence.

In 2020, CSUN lost its AANAPISI status when APIDA enrollment declined just below 10%. The university has been working hard to regain the designation and Pathways interns have been at at the table, collaborating with campus partners to develop APIDA outreach, recruitment and enrollment strategies. They’ve also helped conduct trainings for AAPI transfer students and met with President Erika D. Beck to represent APIDA student needs.

“Our interns are being called upon to represent APIDA students from many different corners of our university,” said Gamboa-Wong. “I’m here as a sounding board, but all of the ideas are theirs. The passion that all of our student interns have and the work they are doing is amazing.”

That work continues to expand its reach. 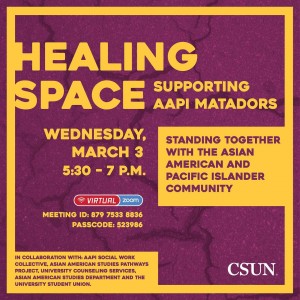 In the aftermath of the Atlanta spa shooting in which six Asian women were murdered, the group’s social media account interaction increased by a staggering 371 percent.

“Growing up with parents who worked long hours in laborious jobs, I saw the oppression and injustice in the world,” said Holly Lin, a senior and Pathways Project intern since the program’s beginning. Born in China, Lin immigrated to San Francisco as a child and became active in social justice. At CSUN, she craved a space committed to community organizing and APIDA issues; she found it in the Pathways Project. With her leadership and in collaboration with Anakbayan Los Angeles, the project endorsed the Philippines Human Rights Act in the U.S. Congress to suspend United States tax dollars to the Philippines until the country’s military and police forces stop their human rights violations.

“Ethnic studies provides a foundation for critical thinking in this world,” said Lin, a double major in Asian American studies and psychology. “We learn in our classes about student activism, our histories and our ancestors fighting for liberation for oppressed people. We’re applying what we learn in our classes to create genuine change in the world. It’s been rewarding to see [the project] flourish beyond the walls of our university.”

Looking ahead, the Pathways team hopes to resume a project they launched pre-pandemic with Asian American studies professor Gina Masequesmay to conduct CSUN’s first APIDA students needs assessment. In the meantime, there’s no shortage of important work to do.

Since its founding four years ago, the project has gained momentum and hopes to receive more permanent institutional funding, which would allow them to hire more students, gain access to more resources and provide a pathway for more students to succeed.

“Race, income, first-generation college status, family background — the Pathways project is one place where the intersectional experience of our AAPI students is not only recognized, but honored,” Buenavista said.

“Retention happens when we have programs where students can find community,” Gamboa-Wong added. “[The project] gives students that sense of belonging, and anything worthwhile takes a village. A program like ours says, ‘We are here to stand with you.’ And that support is what helps students succeed.”

In 2020, Steiner was the only undergraduate who applied for and received funding for one of CSUN’s Diversity and Equity Innovation Grants. Her project provided online peer mentoring to connect APIDA students in and out of the classroom during the pandemic.

“I was the student that the Pathways program exists for,” said Steiner, who plans to pursue a graduate degree in anthropology. “Now I want to be that student for someone else looking for belonging.”