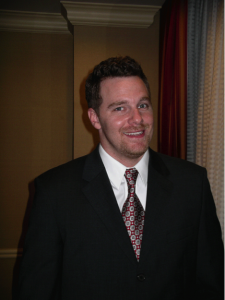 An endowed scholarship is helping two students reach their dreams of working in the film industry. Alejandro Echevarria and Ryan Roope, students in California State University, Northridge’s Department of Cinema and Television Arts, each recently received a Scott M. Weiss Memorial Scholarship of $5,000 for this academic year.

Created in 2010 with an anonymous endowment of $1 million dollars to the university, the scholarships honor Scott Weiss ’01 (Multimedia Production), who was tragically killed in a car accident in 2008, at the age of 32. Each year, the endowment funds scholarships for Department of Cinema and Television Arts students in their senior year at CSUN.

Echevarria, who is a film major, was particularly thankful for the scholarship because it will allow him to devote more funds to his senior thesis film project, which requires a significant financial contribution from each student to pay for production costs. He will also have more financial security as he moves into the professional art world after graduation.

Echevarria recognizes the role philanthropy has played in his education. “CSUN has been, over the past four years, a material contributor to my intellectual, creative and professional development with its highly qualified faculty, staff, facilities and student body,” he said. “Philanthropy in higher education is of utmost importance because it will expand the opportunities for students … I would not have the opportunities that I have today without the important contributions from [donors].”

The man behind the named scholarship is Scott Weiss, who transferred to Northridge in 1999 after having completed his general education requirements at Pierce and Valley Colleges. He enrolled in what was then the Department of Radio, Television and Film, aiming to eventually work in the entertainment industry. He graduated in 2001 and went on to successful career for the next seven years, working for two post-production companies and Fox. He was killed on July 12, 2008.

Karen Kearns, a faculty member in the Department of Cinema and Television Arts, had Weiss as a student in fall 2000.

“Scott was in my single-camera television class,” she said. “He and his group created a wonderful, five-minute piece called ‘Silver Lining.’ It was about a little girl who was hit by a car and killed. Her organs were donated and the family met the little girl who received their daughter’s heart. It was very touching. It also was the first time one of our television projects won a CSU Media Arts award. Scott was the editor on that team.”

“He was a great student. He was funny and he worked really well with his group,” Kearns recalled. “He just added so much to the team and its ability to create this wonderful story.”

Kearns said she was “touched” that an endowment for cinema and television arts students was created in his honor.

“It is so difficult to think that a student this young has left us,” she said. “Yet, his legacy will live on in the work of these other students he is able to help.”

For more: Learn more about the Scott M. Weiss Memorial Scholarship and read about Alejandro Echevarria’s experience at CSUN in the Meet a Matador series.

Your donation can make a difference! Help other students by contributing to CSUN student scholarships.