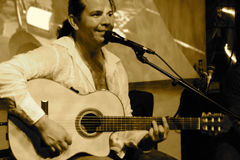 José Garcia, a locksmith at California State University, Northridge, was at work when a message was left on his cell phone that he had booked a gig playing for President Barack Obama.

“I listened to the message, and I’m laughing it off,” Garcia recalled. “I even went over to the secretary and said, ‘Check this out!’ I played the message a bunch of times. I couldn’t believe it. I thought it was a practical joke.”

However, the message was the real deal. It led to a once-in-a-lifetime opportunity for Garcia to play the guitar and sing for the president and his supporters during a “swanky” fundraiser this summer in Beverly Hills.

“I’ve been to events with many movie stars, and that’s nice, but the president of the United States is so different,” Garcia said. “It’s a totally different league.”

As if playing for the president wasn’t enough, Garcia said the opportunity created a connection with his late father that he never thought possible.

“It meant so much to me to have that connection with my father.”

Garcia said he is a self-taught guitarist who has been playing since the age of 5. He plays guitar and sings in English and Spanish, primarily jazz music classics. He has released his first album “Songs for a Lifetime – Live” and performs regularly at local venues.

While his music career fulfills the creative side of his life, he is a dedicated employee who has worked at CSUN for 24 years.

A first-generation immigrant, Garcia came to the United States in 1988 and quickly found a home at CSUN. He’s worked as a custodian, laborer and facility worker, and eventually took the classes necessary to become a locksmith. The “key” to his success is perhaps his ability to successfully juggle his two careers with a healthy dose of humility.

“The most important of the two is this job at CSUN,” he said. “I approach my job here with a lot of respect and gratitude. I’ve been without a job as a first-generation immigrant where mom and dad aren’t here to help you, and, in fact, you’re expected to send money home to help the family. This is an amazing job to have.”