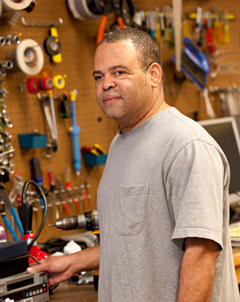 George Johnson ’84 (RTVF) remembers what it was like to be a student at California State University, Northridge. Earning his degree with an emphasis in television production required long hours.

“When I was a student here, the facility wasn’t as nice as it is now,” Johnson said. “Now, we have this beautiful facility with high-end equipment and it’s easier for students to produce projects.”

An 15-year veteran staff member with the department, now known as the Department of Cinema and Television Arts, Johnson is determined to help students take full advantage of their educational opportunities in order to achieve success. He is an equipment technician responsible for Manzanita Hall studios and stages, editing suites, computer labs, facility maintenance and the Alan Armer Screening Room.

“In our department, it’s not like history where you can check out a book and go do your homework,” he said. “It’s very equipment-intensive. The students have to be able to film on campus.” Filming often takes place on weekends when students not only need access to production facilities, but must be supervised by an appropriate staff member. Johnson is always the first to volunteer. His dedication has left an impression on colleagues and students

“There isn’t anybody who does what George does in support of students and faculty,” said cinema and television arts professor Nate Thomas. “He’s never said ‘no’ to anything he’s been asked to do.”

Johnson has seen the campus at its best and worst. After graduating in 1984, he spent time in freelance television production and landed an opportunity as a videographer with the Federal Emergency Management Agency. His job with the federal government brought him back to CSUN following the Northridge earthquake in 1994.

“We videoed all of the earthquake damage in order to get money for rebuilding,” he said. His job with FEMA led to his current position as a staff technician, a role that brings new challenges on a daily basis.

“I don’t know what a ‘typical day’ is,” Johnson laughed. “Every day is different; it’s like police work.”

When he’s not directly interacting with faculty and students, he’s busy managing a host of production equipment that, in total, equals a professional studio. From cameras and projectors to editing machines and a full green screen, Johnson oversees an estimated $4 million worth of technical equipment. He’s constantly on the lookout for things in need of attention.

If an in-studio air conditioning system isn’t working properly, Johnson is the first to know. Multi-million dollar equipment requires full-time climate control. If he can’t fix the problem himself, he’ll quickly arrange to have it done.

Some issues that crop up are more unusual than others.

“We had an event where a drunken guy showed up.  I had to call the police,” he said. “We’ve had homeless people come in looking for a place to sleep.  When there was a bomb threat in Manzanita Hall, the police evacuated everyone but asked that I help them search for suspicious materials because I know every nook and cranny of the building. There’s always something quirky.”

In the end, Johnson said it’s all about helping students succeed.

“There’s a real sense of pride when students graduate and you know you’ve been a small part of that process,” he said. “Our students go on to do great things in the industry.”