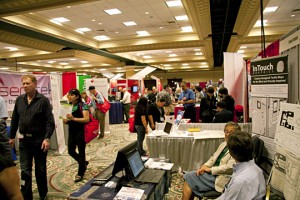 Attendees of the annual International Technology and Persons with Disabilities Conference.

Over six days in San Diego, thousands of people from around the world gather for California State University, Northridge’s annual International Technology and Persons with Disabilities Conference. A pioneering idea now in its 27th year, the conference is the world’s largest event of its kind, and the only one sponsored by a university.

People with disabilities make up the largest group of attendees and are “the reason we all gather to push the research and industry forward each year,” said Sandy Plotin, managing director of Cal State Northridge’s Center on Disabilities, founded in 1983, which organizes the event each year.

The conference presents a unique opportunity for persons with disabilities “to have direct input on the creation of or modifications to assistive technology that is designed to make their lives easier,” Plotin explained. “It also offers our students at CSUN and at other universities an opportunity to demonstrate their ideas for new and innovative technology and get direct feedback from those they want to use it, as well as professionals in the field.”

Given such serious intentions, this year’s keynote speaker might come as a surprise: A comedienne!

Geri Jewell, whose roots are in stand-up comedy, brought national attention to cerebral palsy and ability awareness in her role as “cousin Geri” in the 1980s hit television series “The Facts of Life.” She was the first actor with a disability to have a regular role on a prime time series, and she remains both a working actor and a leading force in disabilities advocacy, using humor to facilitate attitude changes.

For More: Thousands to Gather at CSUN’s Annual International Technology and Persons with Disabilities Conference in San Diego [CSUN Newsroom]