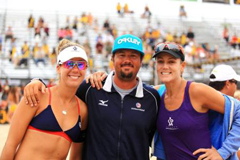 When Jeff Conover played for the CSUN men’s volleyball team, he was one of the leading assist men in the country, once coming in 12th in the nation. Now he is lending a hand to the team of Jen Kessy and April Ross, two women in search of a gold medal in beach volleyball at this year’s London Olympics.

“Being at these Olympic Games at this venue in the heart of London is a huge inspiration,” said Conover from the games. “You realize that this is bigger than beach volleyball, and you’re playing for more than yourself and more than your team. You’re representing your entire nation.”