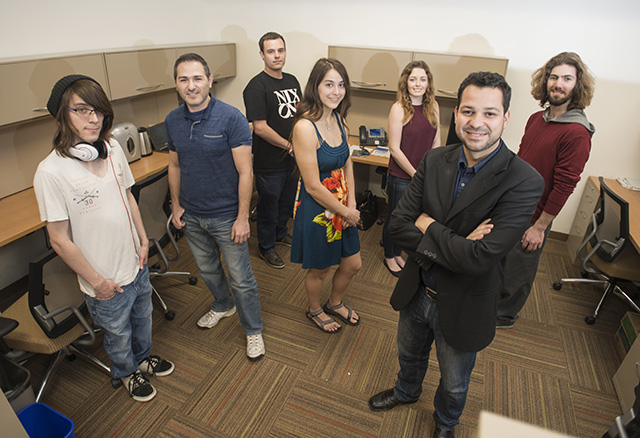 The students are part of a cohort, known as the Origins Lab, working to answer some questions with potentially astronomical answers.

“Science is international,” Lyra said. “In astronomy, in science, nationalities don’t matter. We are interested in what people can do. Where they come from, what native language they speak, doesn’t matter.”

When Cassará studied abroad in the United States for his undergraduate degree, he worked with Lyra at NASA’s Jet Propulsion Laboratory in Pasadena, developing a computer code that would simulate convection in one of Jupiter’s icy moons, Europa. Cassará is continuing to develop the code, which is part of his master’s thesis, as a research assistant at CSUN this year before he returns to Brazil to defend his thesis.

Although he is not in his native country of Brazil, Cassará said he feels like he is part of a community of fellow academics here, too. “The best part is, right now, meeting you all,” he said. “I felt like I was missing this academic atmosphere. I miss this — working, the productivity.”

Yep was in Germany collaborating with astronomers on simulations of star formation. She said her experience studying abroad this summer made her feel at home in the scientific community.

“I’m working with a lot of people who are [in Germany, but are] not from Germany,” she said. “One is from New York and one is from Colombia. Everybody is a little different and everybody is really smart. They are really helpful, too. The best thing is, I get to work directly with my research leaders. It’s a lot more like an internship.”

Lab member and astronomy undergraduate Sean Snyder is collaborating with Lyra on a simulation of planet formation. He said working alongside his professor, Lyra, helps him work through astronomical questions in a more collaborative way, giving him a leg up when he goes on to conduct research after he graduates.

“I am looking at disks and gases and particles and certain areas where they interact with each other. I am really excited,” Snyder said. “Dr. Lyra is a great person to work with. He is really helpful. We’re getting ready to publish. We’ve been exploring the conditions for what bumps trap particles and what bumps don’t. We originally thought we wouldn’t have any troubles trapping these particles. From there we were going to try and simulate planets.”

Origins Lab members also will begin working on a project with NASA’s Hubble Space Telescope to explore and study planetary systems around other stars, Lyra said.

CSUN graduate astronomy student and cohort member Vincent Carpenter added that being able to pursue questions such as the origins of the Earth is rewarding.

“I see it as something that’s important for humanity as a whole — to have curiosity,” he said. “To me, it’s cool. Who cares what sort of economic benefits might come [for me] later from astronomy? I’m doing it because it’s neat.”

Lyra explained that the natural curiosity of those who pursue science and astronomy has advanced society.

“One of my professors in college used to say that astronomy had absolutely no use, except for answering the fundamental questions humankind has always asked itself — who are we, where do we come from, how do we fit in it all, where are we going?” Lyra said.

“Astronomy historically has given back to society in the time scale of centuries,” he continued. “The Last July, CSUN theoretical astrophysicist Wladimir Lyra went back to the City of God, an infamous Brazilian favella, to help inform and inspire its children about space exploration. Photo provided by Wladimir Lyra.

science that we do today is the engineering of 100 years in the future. We use calculus to build everything. The origin of calculus was from Isaac Newton. He developed it because he wanted to know how the planets move. Maybe if Galileo hadn’t pointed the first telescope to the skies, we would still have a totalitarian pope dictating the course of history. [It was] the first moment in history that science unequivocally showed that some ecclesiastical dogmas were categorically wrong. Astronomy was in the forefront of the Renaissance.”

Lyra added that he believes science is a community that grows as more become exposed to it. This year, Lyra started an astronomy book drive, where people can donate their astronomy textbooks to be sent to a school in Kenya. Since last summer, he has co-run a nonprofit program, Ad Astra Academy — “to the stars” in Latin — whose mission is to inspire disadvantaged students to discover opportunities through science and exploration.

Together with colleagues Jeff Marlow of Harvard University, Paul Hayne of JPL, Carolyn Crow of the Livermore National Laboratory and Los Angeles-based film maker Hank Leukart, the group successfully ran a pilot program for 18 students who were between 11 and 16 years old in the City of God favela in Rio de Janeiro, Brazil.

“The main problems that these kids face are economic and a lack of access to education,” he said. “Many of them were never exposed to the idea that science can be a career. It was great to see their enthusiasm when our team of scientists entered the classroom. It was a brand new world for many of them. Yet, we had to deal with social problems that, as a scientist, I’ve never encountered before. For example, how to make them remain in school.

“In the pilot program in the City of God we were told that around a certain age, the boys start to be recruited by the drug lords and the girls start to abandon school, mostly due to teen pregnancy,” Lyra continued. “We targeted the age range just under that. We need to monitor the group to see if Ad Astra will have any long-term impact, but, short-term, some of the kids of the program now say they want to be astronomers. We partnered with astronomy institutes in Rio to give these kids the possibility of internships and opportunities.”

Cassará volunteered as one of the Ad Astra Academy mentors last July, in Rio. He said the experience impacted his perspective on astronomy as not just looking to the stars, but looking to the potential in others’ futures.

“[The children] really give something to you,” he said. “You feel so good helping them.”