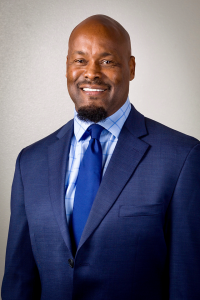 Tyrone Carter swallowed his nerves and strode into the room, dressed in a full suit and exuding confidence. Carter took the podium, facing the CSUN University Student Union (USU) board of directors.

The board was electing a new chair in July 2019, and Carter was nominated. Carter and his fellow nominees had to state their case before the board would vote on its new leader.

“I want to share with you two short stories. Hopefully, you will understand why it is a miracle and a dream to be standing here before you,” Carter said.

Those two stories, he said, would illustrate “what’s possible” and “what’s next.”

With openness and sincerity, Carter shared his intricate backstory, which intersects with some of the most pressing issues of our time, including systemic racism, homophobia, incarceration and drug addiction. As Carter explained in the speech that helped win him the position of USU board of directors chair, his path to a lifelong commitment to activism was a long and winding road of addiction, recovery and spiritual awakening.

“Seven days ago was a huge milestone for me,” he said in his 2019 speech. “You see, after serving seven years in a prison in south Georgia, and 17 years on parole, I received a call from my parole agent last Wednesday informing me I have successfully completed parole.

“Don’t worry, I did not kill anyone,” he said. “It was a different time. The war on drugs was on, and I made a decision that clearly got me caught up in the crossfire.”

A member of the Class of 2020, Carter, 53, graduated from CSUN with a double major in Africana Studies and psychology. For decades, on and off campus, he has dedicated his time and efforts to advocating for the rights of Black and LGBTQIA+ communities, returning citizens and those recovering from addiction — an undertaking that stems from his personal experiences with injustice.

Carter encountered what he thought was unjust punishment that came with the drug war that the American Civil Liberties Union (ACLU)  has criticized as racially motivated — he was incarcerated. But it was in prison that Carter gained a new perspective on the horrible injustices in society and began committing himself to the fight.

“As an African American, formerly incarcerated, gay man and first-generation college student,” he said, he hopes to “empower others to reach their maximum potential and achieve their goals.”

Today, Carter is an intern at the African American Policy Forum, an organization dedicated to promoting government policies that advance racial justice and gender equality. The nonprofit is also behind the #SayHerName campaign that bring awareness to police violence against Black women, girls and trans and gender-nonconforming individuals. As an intern, Carter helps plan and coordinate events and community engagement.

He also has worked with Reach L.A., a safe space for Black and Latino LGBTQIA+ youth. As their young men’s health program manager, he implemented HIV/AIDS risk education programs that discussed safety and prevention, provided counseling and crisis intervention, and produced an Outfest award-winning documentary.

Sparking the Need to Evaluate Change

Carter was imprisoned in 1994 after being charged for trafficking cocaine, and he was sentenced to a mandatory minimum of 25 years and a $1 million fine. Although he was guilty of the crime, he said, as a first-time offender, “I was a victim of the war on drugs.”

The ACLU dubbed the United States government’s initiative to eliminate illegal drugs from American society as the “New Jim Crow,” because it has disproportionately targeted people of color. African American men are overrepresented in prison populations and tend to be given harsher sentences for drug crimes, compared to white offenders.

It was behind bars that Carter made his first step into activism.

As he worked at a law library in the detention center, Carter watched as gay inmates who were living with HIV/AIDS were segregated from the rest of the prison population. They were denied their medication — the strict, regular doses their bodies needed to fight the deadly virus and severe complications. In his gut, Carter knew he could do something to change that. And so he did.

Carter led a three-day work and hunger strike to protest on behalf of the inmates who faced injustice and denounce the discriminatory practices in the correctional facility.

Though Carter would get punished and relocated to solitary confinement for leading the hunger strike, he said, “it sparked a need to evaluate change. These experiences led me to develop an unwavering commitment to social justice, protection and services for vulnerable populations.”

He was released from prison seven years later. But the waters didn’t calm quite yet.

While in prison, Carter wrote to documentary producer Dorothy Thompson, whose nonprofit Streetlights — dedicated to promoting diversity in film and television — paved a path for him in the industry. He was accepted into Streetlights’ Production Assistant Program shortly after his release, and eventually, he landed a position in art production assistance for NBC.

Soon, he was “making almost six figures a year, traveling the world, had cars, money, everything,” he said.

But as he relied on the material world, he lost his “spiritual connection,” he said, and he found himself in a brutal, years-long battle with drug addiction.

“One day, very close to suicide, I just asked God to relieve me of this craving, of this addiction,” Carter said. “And He did. Then, in the process of that, I ended up trying to go back to school.”

For Carter, it wasn’t too late to pursue a degree that could turn his life around and help him make a difference in the lives of others trying to recover from addiction.

He pushed toward recovery, finishing a long-term rehabilitation program. And, at 52, after completing a few classes at Los Angeles Valley College, Carter transferred to CSUN with the goal of becoming a social worker.

He didn’t wait until after graduation to undertake his personal mission — he did it right on campus.

Before becoming the USU board of directors chair, Carter also served as a member of its Diversity and Inclusion Committee. As an undergraduate, he also mentored students in CSUN’s Department of Africana Studies, engaged with fellow African American students in the Black Male Scholars Program and M3 Minority Male Mentoring Project,  and he supported fellow formerly incarcerated students as a CSUN Revolutionary Scholar. His activism even seeped into his academic studies.

“His research on the impact of higher education on reducing recidivism rates among formerly incarcerated African American males is timely and much needed,” said Africana Studies professor Marquita Gammage. “Throughout the semesters, he demonstrated the knowledge and skills to serve as a change agent in the world.”

Carter graduated in May as one of CSUN’s Outstanding Graduating Seniors. And on June 22, he celebrated the anniversary of his “spiritual awakening” and four years of sobriety.

In the fall, he will begin the Social Welfare graduate program at UCLA. He said he plans to earn a doctorate and “give it back by being of service to my community.” As a social worker, he aims to help with topics related to mental health disparities affecting ethnic minorities and the LGBTQIA+ community.

He already has gotten a head start this summer as he interns for UCLA’s Screening and Treatment for Anxiety and Depression (STAND) Program, where he has been providing internet-based cognitive behavioral therapy support to students during the pandemic.

When it comes to instigating change in society, “you first have to see the change within yourself,” Carter said. “Realize your power and know that your voice matters, and that you can ask for things and ask for help. Know that asking for help is not a weakness — it’s a sign of resilience and perseverance.”