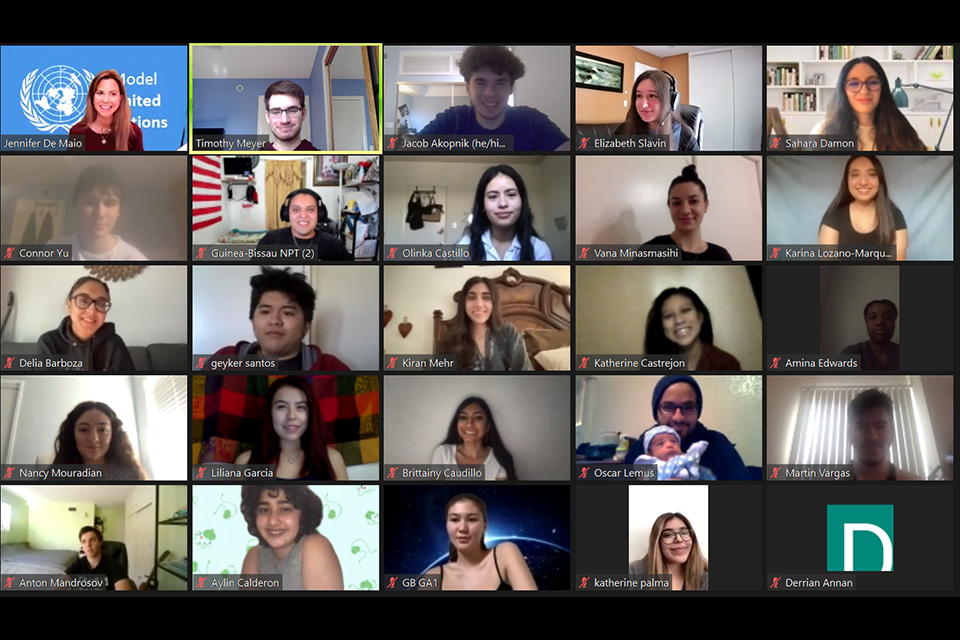 The team, which represented the countries of Niger, Guinea Bissau and the United States across 14 committees, also took home individual first-place awards in five committees: the First and Third Committees of the General Assembly, Peacebuilding Commission, Security Council and World Health Organization.

“This victory is a huge win for us because we were again working with a team that has never attended an in-person conference,” said CSUN political science professor Jennifer De Maio, the faculty advisor of the CSUN Model UN team, “and because we had 28 students participate in the conference, which is the most we’ve ever taken to New York — one of the few advantages of a virtual conference is that we could ‘bring’ more students.”

With the exception of head delegate students Sahara Damon and Timothy Meyer, last year’s cohort was also comprised of students who had not participated in an in-person conference, De Maio said.

“It’s also an important win because this is the highest profile national conference,” De Maio added.

The largest and longest-running intercollegiate Model United Nations, the NMUN runs 22 simulated United Nations committees, which operate under procedural rules developed with the United Nations Institute for Training and Research.

Led by Damon and Meyer, the CSUN Model UN team “researched, wrote position papers and delivered speeches on various topics, including the Establishment of a Nuclear Weapon-Free Zone in the Region of the Middle East, the Impact of COVID-19 on Peace and Security, and Empowering Youth as Agents of Peacebuilding,” De Maio said.

“They worked so hard all semester and spent many hours training and preparing for [the] conference,” De Maio said of the students. “It is so wonderful to watch them succeed.”