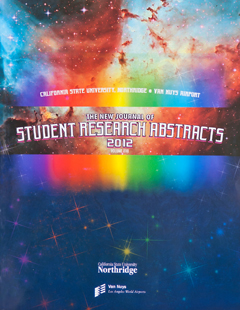 For almost a year, local K-12th grade students toiled tirelessly, racking their brains, testing out theories and hypotheses on topics ranging from whether mice really do prefer cheese to whether dairy products have an effect on singing.

The results of these and dozens of other experiments were published in the 17th volume of California State University, Northridge’s The New Journal of Student Research Abstracts, which was recently released.

Founded by CSUN biology professor Steven Oppenheimer, the journal aims to showcase significant work conducted by local young scientific researchers and the teachers who assist them throughout the process. It is published annually in a collaborative effort between Cal State Northridge and the Van Nuys airport. It features schools from throughout the San Fernando Valley.

“The journal showcases the research of young students and excites them about research science,” Oppenheimer said. “This is critical for this nation’s future as national security, health and welfare depend on top U.S. research scientists.”

Through an “open door” model, any K-12 teacher can submit a student abstract to Oppenheimer for review. The abstracts submitted can cover a wide range of topics. For example, Ashley Maynez and her teacher, S. Tanaka of Gaspar de Portola Middle School in Tarzana, wanted to know if playing the video game “Guitar Hero III” improves reflexes. They subjected two volunteers through a series of reflex exercises. Following these exercises, volunteers were asked to play one, four-to-five minute “Guitar Hero” song. Next, volunteers repeated the initial reflex exercises and results found that reflexes related to sound were significantly improved.

Christine Montemayor and Nora Lapena of Ernest Lawrence Gifted/Highly Gifted Magnet Middle School in Chatsworth wanted to know the effects of chocolate and dark chocolate on acne. The two, guided by their teacher, G. Zem, experimented by feeding participants one serving of Hershey’s Kisses — one dark and one regular — in alternate weeks. The students took a photo of the face of each participant. They found that both chocolate types caused acne breakouts; however, dark chocolate caused worse effects than the other.

Oppenheimer noted that the journal is now available via the Internet thanks to CSUN Scholarworks, a digital preservation program accessible to the public.

“Thanks to CSUN ScholarWorks, the journal is now on the worldwide web for students and teachers worldwide to use,” he said. “This is a monumental development for the journal, CSUN, Van Nuys Airport and the Center for Cancer and Developmental Biology.”

Oppenheimer said the ultimate goal of the journal is “worldwide enhancement of K-12 science education.” He has received numerous awards for his dedication to science education including the 2009 U.S. Presidential Award for Excellence in science, mathematics and engineering mentoring.

In a letter published in this year’s journal, former high school student researcher Drew Edelberg expressed how his participation in the journal granted him “invaluable research experience” that aided in his success at UC Berkeley and now at Columbia University, where he began his work toward a Ph.D. in solid-state physics in fall 2012.

To view the journal online, visit the CSUN ScholarWorks website. The next abstract submission deadline is June 1, 2013, and can be sent via email to Steven Oppenheimer.

College of Science and Mathematics, Research