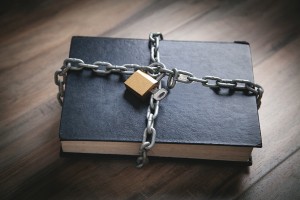 Banning books from school libraries is a practice that is still happening all over the country. Banned Books Week highlights it every year, in September — but it’s also a celebration of the freedom to read. This year, CSUN marked its 10th annual Banned Books Readout, which took place Sept. 29th in the University Student Union. Students read excerpts from commonly banned books and heard from a local middle school teacher about what her students want to read.

PEN America, which monitors book bans around the country, notes that the most commonly targeted literature for bans are books with LGBTQ+ themes, characters of color, sexual content, issues of race and racism and themes of rights and activism.

The books featured in CSUN’s Banned Books Readout event were of the Young Adult genre.  Some famous titles read from included “13 Reasons Why” by Jay Asher, “The Hate U Give” by Angela Thomas and “This Book is Gay” by Juno Dawson.

The keynote speaker for the event was Karimah Tennyson-Marsh, an ELA teacher at Century Community Charter School in Inglewood. Tennyson-Marsh is also a writer and contributor to a blog called “Rich in Color,” that focuses on Young Adult literature. She said authors and teachers around the country are being harassed and attacked because of what they are writing and assigning to students.

Tennyson-Marsh said students want to explore certain themes in books, and she wants them feel safe to do that in her classroom. One student wanted to read about suicide ideation, so Tennyson-Marsh suggested a book for her to read. “She felt safe enough to share her thoughts with me and all because I gave her a book that allowed her to have a voice.” She allows her students to read certain books they are interested in because she values diverse voices and trusts them with the knowledge.

Sonia Hiew, one of the student readers who read from one of the challenged books, “I Know Why the Caged Bird Sings” by Maya Angelou, said, “The excerpt that I read from is such a good excerpt because it talks about differences and experiences when you’re of a different skin color.”

When asked about her thoughts on book banning, Hiew said, “Terrible. I am a journalist, I believe in free speech. The First Amendment is the most beautiful thing about America.”

Elizabeth Blakey, an associate professor in the journalism department organized the event, along with representatives in the University Library, and the Department of Journalism. The Queer Studies Program and the Pride Center assisted with the event, as well.