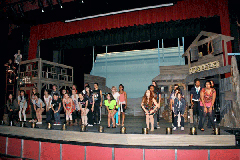 When veteran instructors of CSUN’s Teenage Drama Workshop (TADW) Ronnie Sperling and Chris Halsted had a brainstorm last summer, it might have seemed like the two had taken a bite of some sort of magical apple. Their idea was to reimagine the classic tale of “Snow White and the Seven Dwarves” and give it a modern update. Well, somewhat modern — they wanted to set it in the time of cowboys and silver spurs.

“The first thing we said was it’s going to be a western,” Sperling said.

“Westerns are so rarely done these days,” Halsted added, “and we both have a love for them. And if you are going to do something, you might as well do something you love.”

Out of that love came the inspired reinterpretation, “Snow White and the Magnificent Seven,” that will be running at CSUN’s Little Theater. The play will be produced with the students currently enrolled in CSUN’s nationally recognized, 55-year-old TADW, a group of 30 who are enrolled in grades 7-12.

In the morning, students attend classes that focus on acting, voice and dance and can choose electives in improvisation, musical theater, playwriting or the technical aspect of theater production. The afternoons are spent in rehearsal. There is currently another group on the program preparing to perform a production of “Bye Bye Birdie” at CSUN’s Campus Theater from Jul. 25 to Aug. 3.

However, while “Birdie” is a classic, this new take on “Snow White” is anything but. The directors know that lovers of westerns will know what is being spoofed, and even those who don’t will enjoy the origin of the story, the original Grimm’s Fairy Tale (minus Snow White’s miniature companions). On top of that, their students have already given the directing duo a reason to be proud: an interpretation of the material they can share with everyone in the family.

“Having kids ourselves,” said Halsted, “and having gone to many kid shows, as an adult you sit down and think, ‘what am I doing here?’ We want the adults who come to leave thinking, ‘boy am I glad I came.’”