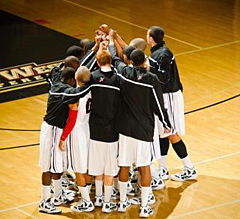 The CSUN men’s basketball team is preparing for a great run in 2012-13, scheduling games against top talent like UCLA, Utah, Tulsa and BYU to show they’re ready to take the next step for Matador basketball.

The team’s first test will be a challenge for the Big West title. This year, an improved roster is looking to bring the team back from the cellar. Eleven letter winners return, including the top three scorers, guard/forward Stephan Hicks, Josh Greene and forward Stephen Maxwell. Hicks and Greene garnered All-Big West Conference honorable mention honors last year, and Hicks was also named Big West Freshman of the Year in 2011-12.

The team will need more firepower to take on some of their tougher foes of the season, including local and national powerhouse UCLA. They take on teams that aren’t treaded on lightly: three Pac-12 teams — the Bruins, Arizona State and Utah — and BYU. The Matadors will also play in the San Diego (USD) Tournament, which will include Tulsa, Siena and Northern Kentucky.

Are women in Japan tryig to change their culture?

10 Latinx business leaders who are championing diversity in their companies — and within their own community.