The presentation was made during the association’s star-studded annual luncheon earlier this month in Beverly Hills. The $50,000 grant to CSUN’s Department of Cinema and Television Arts will be used for fellowships for students working on their senior film projects. 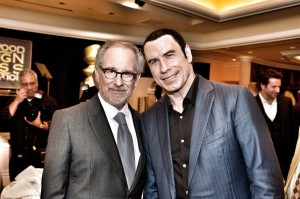 “The association’s grants and fellowships to the film program at CSUN have literally made the difference between mere artistic aspiration and actual fulfillment of dreams,” he said. “It gave out more than $1.2 million, less than the $1.5 million given out last year. This means some grantees got less, and some were not funded. An HFPA trustee told me they love the kind of work coming out of the film program here and funded us at the same level as last year.”

Thomas said the funding makes all the difference for students in CSUN’s film program.

“Our students are working class and every financial gift helps them move closer to realizing their dreams,” he said. “The association understands that, and that’s why their grant means so much to us.”

“Members of the Hollywood Foreign Press Association always look forward to our annual summer luncheon,” said association trustee and former president Philip Berk. “Not only do we celebrate the installation of the organization’s new officers and board members, we take pride in donating over $1 million in charitable contributions to many outstanding film-related charities and educational institutions.”

Thomas said the luncheon presents an opportunity for CSUN officials to get real feedback from industry leaders.

“You know you’re on the radar,” said Thomas, “when people at the luncheon like ‘Boyz-n-the Hood’ director John Singleton approaches you and says ‘I’m hearing a lot of good things around town about the film program at CSUN. Keep up the good work.”

The Hollywood Foreign Press Association is made up of international journalists who report on the entertainment industry. It hosts the Golden Globes each year, and awarded more than $10.5 million in charitable donations in the past 15 years.

CSUN’s Department of Cinema and Television Arts’ relationship with the association goes back 15years. In addition to the association’s support of senior film projects and the university’s annual senior film showcase, CSUN students also edit in the Hollywood Foreign Press Association Senior Film Edit Suite and work on sound design in a state-of-the-art sound mix facility made possible by a grant from the association.