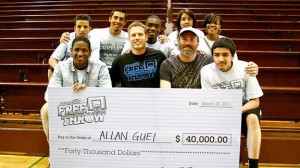 Alan Guei (center, second row) is surrounded by the filmmakers and the students he helped. Photo courtesy of ESPN.

They say the backbone of any basketball squad is its backcourt, the two guards who are in charge of protecting the ball. At CSUN, the men’s basketball team has one of the strongest backbones in the country—and that only partially has to do with what they do on the court.

Scholar-athlete Josh Greene has drawn attention for his prowess on the court and in the classroom. His teammate, Allan Guei, is just as phenomenal, as evidenced by the new documentary, “Free Throw.”

“Free Throw” highlights the then-Compton High senior Guei as he’s invited to participate in a free throw competition at his school. The organizer of the event, Court Crandall, is a screenwriter who asked friends and associates for donations to create a fund for kids at the school. Crandall’s son, Chase, played high school basketball in affluent Manhattan Beach, and knew the kids at Compton High had the ability to go to college but not the funds. Crandall raised $40,000 and  decided to host a competition—a free throw contest with the seven entrants chosen randomly—to find a recipient of the funds.

Guei was one of those  chosen. Some grumbled it was unfair. After all, he had received a full scholarship to CSUN. But when Guei threw the winning shot, what he did next silenced his detractors and caught everyone’s attention. He gave the $40,000 to the other kids who participated, including one who couldn’t shoot because of a pregnancy.

“I mean, if I already ate and somebody’s starving next to me,” Guei told ESPN, “I’m not going to eat again, right? People I’ve never met in my life find me and go, ‘I’m so proud of you. I’m so proud of what you did. Friend me. Call me.’ I’ve never had that kind of thing in my life.”

Read more: Guei Made Sure That Everybody Won [ESPN]