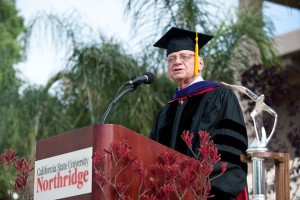 Back in 1962, Vincent P. Barabba graduated from what was then San Fernando Valley College with a degree in marketing. With that diploma, he would become the Director of the U.S. Bureau of the Census, which, among other things, shapes the way America looks at itself. CSUN is celebrating this aspect of Barabba’s life in American politics by conferring him a degree during the 2012 Commencement ceremonies.

Barabba began his career as a pollster when he opened up a firm that provided electoral information to political campaigns from city hall to the presidency. Rather quickly, he ascended to working in the White House when Richard Nixon chose him to be the Director of the Census Bureau in 1973. Presidents Ford and Carter followed suit, making him one of the first to be appointed to the position by commanders-in-chief from different parties.

Aside from his political life, Barabba never strayed too far from the CSUN family. He is a member of the Board of Directors of the California State University, Northridge Foundation and CSUN’s Ad Hoc Committee on Athletics Engagement, and was co-chair of the university’s 2010 Founders Day celebration. He was also a recipient of a Distinguished Alumni Award in 2003.

“The learning experiences and the actions in which I participated while at CSUN contributed to my ability to play a part in a wide range of rewarding activities over the last 50 years,” Barabba said. “The recognition associated with this honorary degree for what was accomplished following those experiences and actions is greater than the totality of all the previous acknowledgements. It is deeply appreciated.”