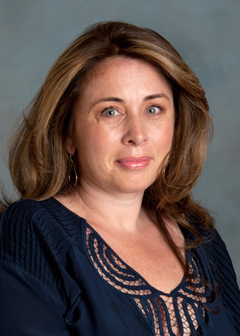 Stacia Short-Baguio thought she was done with education when she dropped out of high school at 17. She had always been a bright student, but the chaos in her life was hectic. Her single, teenage mom had a hard time keeping a roof over their heads and provided little support. She needed stability and a job.

Short-Baguio left high school five units short of her diploma. She began working in the garment district in downtown Los Angeles. Her talent was recognized, and she was recruited to work in sales at a retail apparel boutique. She quickly moved up the ladder, overseeing a network of 23 stores across six districts. But she was keeping a secret and knew something was missing.

“The shame of not graduating high school continued to torment me,” Short-Baguio said. “I kept it a secret.”

At 39, Short-Baguio had a child and decided it was time to “reinvent” herself. She enrolled at Pierce College and finished her two remaining high school classes to earn her diploma. In the spring of 2009, she had hopes of transferring to UCLA, but tragedy struck. Her husband was hospitalized, and she had to reduce her class load. She didn’t have enough units to transfer.

“I was distraught,” Short-Baguio said. However, after some research, she found out she was eligible to transfer to California State University, Northridge.

Today, the 44-year-old communications studies major said coming to Cal State Northridge was the best decision. Inspired by her professors, Short-Baguio immersed herself in campus life, both academically and through activism, serving as vice president of the Gender and Women’s Studies Student Association and volunteering at the Women’s Resource and Research Center. She also served as a production intern for the “Dr. Phil” show. Her paper on Michelle Obama’s “Let’s Move” campaign was accepted for the 2011 Undergraduate Scholars Conference. She was one of only 30 undergraduates chosen to participate in that conference. These accomplishments are the reason Short-Baguio has been selected the 2012 Wolfson Scholar.

“I connected with the instructors and developed relationships,” Short-Baguio said. “I feel that I got recognition that has propelled my success.”

Short-Baguio will be among approximately 1600 students recognized during the university’s Honors Convocation ceremony at 6 p.m. on Monday, May 21. She is one of CSUN’s outstanding graduating seniors. The award is presented each year in memory of Cal State Northridge’s first vice president, Leo Wolfson. Not only must the student have an exceptional academic record, but he or she must also have made significant contributions to CSUN or to the community through co-curricular and extra-curricular activities.

“My life experience allowed me to mentor younger people and advocate for social change,” Short-Baguio said. She said as a peer educator at Joint Advocates for Disordered Eating (JADE), she was able to arm college students with valuable knowledge about eating disorders, media literacy and body image.

“She is at the top of the list of intelligent, engaged and well-rounded human beings with whom I have had the privilege to work, learn and teach,” wrote communication studies professor Kathryn Sorrells, in her assessment of Short-Baguio.

In addition to being the mother of an 8-year-old, Short-Baguio said she is busy researching graduate school options.

“I am a first-generation college graduate, and I’m proud of that,” Short-Baguio said. “It’s never too late to pursue a dream.”

Alicia Ana Ayala, of Venice, is the recipient of the Karen, Leon, and Rita Goldstein-Saulter Memorial Award. She is a psychology and child and adolescent development double major who has maintained a 3.40 GPA. Ayala, a recipient of the Ronald E. McNair Post Baccalaureate Achievement Scholarship and the National Institute of Mental Health Undergraduate Honors Fellow, is a well-rounded student who maintained a rigorous and advanced course load. She was a research assistant under Gabriela Chavira, an associate professor in the Department of Psychology, and a member of the student organization “Hermanas Unidas.” Ayala has been committed to volunteering with community organizations such as Relay for Life, AIDS Walk, Day of the Child, Meeting Each Need with Dignity (MEND) and Adelante Hombres Youth Summit. After overcoming countless adversities and disparities, Ayala aspires to be a developmental psychologist who aims to enhance the health and well-being of individuals within the community. “(My) motivation stems from past experiences as well as future capabilities,” she said. In the fall, Ayala will pursue a master’s degree in human development and social intervention at New York University.

Marissa Colangelo, of Northridge, is the recipient of the CSUN Foundation Award. She is a child and adolescent development major who has attained a 3.56 GPA. Colangelo, who has been accepted to both Columbia University and the University of Southern California masters of social work programs, has a love for volunteer and social work. She has successfully managed to balance a 35-hour work schedule while maintaining involvement as a peer mentor in the Professional Pathways, Careers in Child and Adolescent Development class; Monday Night Missions; and the Middle School Diversity Project (MSDP). In addition, Colangelo presented research at the 11th Annual Psi Chi Whittier Undergraduate Research Conference and the 21st Annual UCLA Psychology Undergraduate Research Conference. Despite her achievements, Colangelo has overcome adversity by becoming the first person in her family to attend a four-year university. She has decided to attend Columbia. Her career goal is to become a licensed clinical social worker working with students with special needs.

Swapna Pawar, of Northridge, is the recipient of the CSUN Foundation Award. She is an electrical engineering major who has maintained a 3.92 GPA. A student of academic distinction, Pawar has consecutively been on the dean’s list since 2007. She is the recipient of several scholarships, including the Nirmal Mishra Engineering Annual Scholarship (2007–2012), the Solid State Microwave Engineering Annual Scholarship (2010–2011), the Pradip and Rekha Choksi Endowment in Engineering and Computer Science Scholarship (2011–2012), and the Northridge Scholars Program Recipient (2010–2012). Pawar has successively demonstrated academic excellence throughout her undergraduate career. In addition to maintaining high academic standards, she has maintained a successful career as a collegiate athlete. She was a member of CSUN’s women’s tennis team and a nationally ranked lawn tennis player in India. Pawar tutored students in the Department of Mathematics as well as participated in other extracurricular activities, including her participation with the Institute of Electrical and Electronic Engineers HKN Etta Kappa Nu Chapter. During her senior year, Pawar obtained an internship at the Metropolitan Water District of Southern California, along with other extracurricular activities. Upon graduation, Pawar plans to work as an engineer and eventually return to school to earn an MBA.

Zachary Roof, of Northridge, is the recipient of the Karen, Leon, and Rita Goldstein-Saulter Memorial Award. He is an economics major who has maintained a 3.75 GPA. He credits both the University Student Union and the Department of Economics for helping him achieve success. During most of his time at Cal State Northridge, Roof has been actively involved at the University Student Union. He started as a member of the Finance Committee, has served on the USU Board of Directors and was elected in 2011 as vice-chair of the USU Board of Directors. He was a member of the Business Honors Association in the College of Business and Economics. Through the association, he has tutored numerous students and developed himself professionally. Roof said he “credits” CSUN for giving him an opportunity to challenge himself. He has been accepted into Johns Hopkins University’s nursing program. He is considering a career either as a psychiatric or anesthesia nurse and plans to pursue a doctorate in nursing.

Marco Antonio Duarte, of Northridge, is a cinema and television arts major, with an emphasis in multimedia, who has achieved a 3.42 GPA. After high school, Duarte joined the U.S. Marines Corps. He was meritoriously promoted three times. Determined to get a college education, Duarte would take satellite college courses when he had a spare moment. Upon his honorable discharge from the Marines, Duarte continued to pursue his education, eventually earning an associate’s degree from a community college before transferring to Northridge in 2009. While at CSUN, he often served as a mentor to fellow students. He completed his studies last fall and within a month landed a job in the film industry.