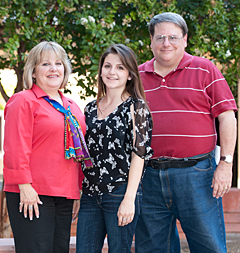 When Myrna Vallens passed away in 2011, her children knew they had to do something special to honor her passion for education. While many people view college as a means to an end, Myrna cherished it. For most of her life, she was in school, always taking a class or two in whatever subject interested her at the time. Over the decades, Myrna amassed hundreds of credit hours and multiple degrees at CSUN, including a bachelor’s in Art, a secondary teaching credential and a master’s in special education, learning and reading disorders.  While taking classes herself, she also taught, counseled and worked in special education at Kennedy High School in Granada Hills for 20 years.

Her family followed her example. Her son, Brent Vallens, earned his bachelor’s in Political Science from CSUN in 1977. Brent actively participated in student life at CSUN and continued his involvement after finishing law school, serving as president of the CSUN Alumni Association from 1982 to 1985 and a trustee of the CSUN Foundation from 1982-1986.

Myrna’s daughter, Nancy Vallens, earned her bachelor’s in Liberal Studies in 1980 from CSUN and is now an elementary school principal. Nancy’s daughter, Amanda Schramling, is continuing in her grandmother’s steps as a teacher by currently pursuing a degree at CSUN in special education.

When deciding how to honor their mother, the Vallens children had many options. Myrna was a docent at LACMA and regularly gave to many charities, but the siblings knew their mother’s heart was at CSUN. “Education was absolutely the most important thing to her,” says Nancy.  Plus, as Nancy shared, “there’s always a warm feeling with CSUN,” and she and her brother wanted to help that continue.

So, in leiu of flowers or gifts for Myrna’s memorial, the family asked that donations be made to CSUN’s SAGE program for retired adults, which Myrna actively participated in until she was diagnosed with cancer just five weeks before her death. The response was very generous, and the family realized that they had the opportunity to make a lasting impact on the campus by endowing a scholarship.

So, with the gifts from Myrna’s friends and the addition of some of their own funds, Brent and Nancy established the Myrna Vallens Scholarship Endowment, ensuring that their mother’s legacy of education will live on, in perpetuity, through annual $500 scholarships for students in CSUN’s Michael D. Eisner College of Education.

“I know that the gift is not a lot, per se,” said Nancy, “but if it can help a student in the education department just get over the little hump… I know my mother would be honored that her name is associated with a gift that can help a student. CSUN was a major factor in her life and ours, and we would just like to keep it going.”