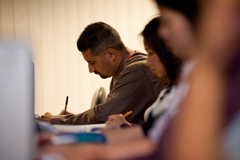 As former CSUN President Jolene Koester was preparing to end her 10-year run, she was looking forward to the school’s future and rising profile. With so many issues in flux — changing budgets, demographics and more — Koester formed the Special Task Force on Engagement, an 18-member team of distinguished alumni that was charged with shaping CSUN’s future.

Included on that list were co-chairs Hawaii Governor Linda Lingle ’75 and CSUN Foundation Chair Earl Enzer ’83; William C. Griffeth ’80, news anchor at CNBC; and Charles Noski ’73, vice chair and former CFO of Bank of America and board member of Microsoft.

The result was the report, “Engaging the Future of California State University, Northridge,” which suggested the school focus on six areas: establish a clear, consistent and compelling brand and case for support; organize and energize the university’s base of alumni, parents, and community and business leaders through a combination of approaches; expand involvement of the university’s most successful and influential alumni and friends; build opportunities for increased synergy among volunteers at all levels; use the new Valley Performing Arts Center to attract and retain stakeholder interest; and explore the feasibility of employing intercollegiate athletics as a major tool of engagement.

“The engagement of our stakeholders — alumni, parents, community leaders, civic and business leaders — is critically important to the future of the university, “ said Koester,  “and to our ability to attract increased philanthropy and public policy support.”