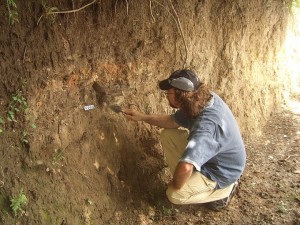 CSUN Professor, archaeologist and art historian Owen Doonan is changing the way people think about Arab, Turkish and Persian cultures. Doonan, who has taught, traveled and conducted research around the world and studies cultural transformations resulting from interactions among cultures, specializes in the ancient cultures of the Mediterranean and Black Sea regions. He was recently named CSUN’s 2011–2012 Jerome Richfield Scholar — awarded each year to an outstanding faculty member conducting research in the arts, sciences or humanities­.

“I’m very aware of the really great work my colleagues are doing, and the idea that I would be singled out, it’s great, it’s wonderful,” Doonan said. “CSUN is a learning-centered university where people are doing some really exciting research. There is vibrancy in the intellectual community here when it comes to learning, doing research and connecting to the real world.”

Doonan’s passion for the Middle East and that regions’ contemporary art served as a catalyst for him and business partner D. Carl Dentzel to open a gallery in Northridge called The New Sahara Galley.

“There is this stereotype that the Middle East is not very contemporary or progressive, and I knew that wasn’t true,” said Doonan. “All the Middle Eastern art you see in museums and in books are from the past, and I want to change the way people think about Arab, Turkish and Persian cultures. I’m hoping that The New Sahara is one way to do that.”