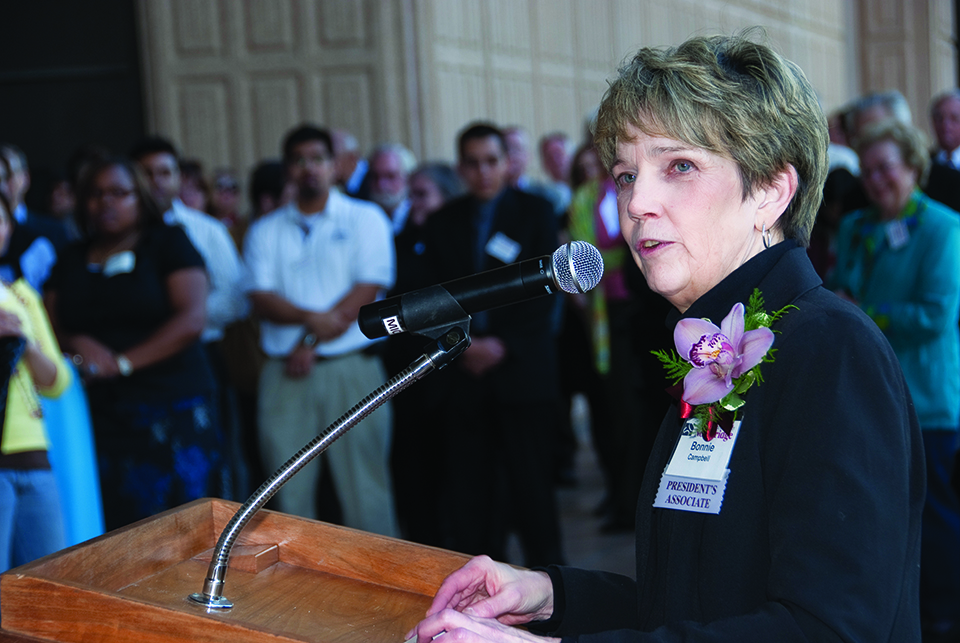 A resilience borne of 10 family moves before starting her senior year in high school. High expectations from parents, and particularly a mother, whose childhood hardships during the Dust Bowl and Great Depression informed their own childrearing philosophy. Innate determination. These factors — and, of course, other life experiences and challenges along the way — combined in a way that propelled Bonita (Bonnie) Campbell to excel in a field that was, in her era, generally reserved for men. She pushed through the glass ceiling, and Campbell’s influence as a woman in the sciences — and on women in the sciences — is remarkable.

Campbell’s star shone brightly at CSUN, where, in 1975, she was the first woman to be hired in a tenure-track position and ultimately gain tenure as a full-time engineering professor in what is now the College of Engineering and Computer Science. Other noteworthy achievements: her two appointments as chair of the Department of Civil and Industrial Engineering and Applied Mechanics; and as founding chair, the creation of a new entity within the college, the Department of Manufacturing Systems Engineering and Management (MSEM). Her progression to tenured faculty and department chair came during a time when, Campbell said, “Women who had made it into tenured faculty positions in engineering were quite rare, and those who then made it into department chair positions were even more scarce.”

Campbell’s 33 years at CSUN would also include a deep commitment to and interest in faculty governance; she became the vice president of the CSUN faculty body and was an elected campus senator in the California State University system Academic Senate. This experience, together with her background as department chair, served her well during her years in the then newly created position of Associate Vice President for Academic Planning and Resources.

“Not only did I learn a lot about how the institution works as a whole, I learned how to appreciate the institution in the broad sense, rather than just sitting in my little corner,” said Campbell.

Campbell’s immersion in the CSUN community was preceded by other consequential experiences: three years of engineering studies at the University of Colorado, Boulder; marriage and motherhood; completing her B.S. at Colorado State University; a decade in industry, most notably as the first female industrial engineer at Kaiser Steel Corporation (now defunct); and the juggling of graduate studies at Pepperdine University (MBA) and the University of Redlands (M.S.). She capped off her quest for knowledge by earning a Ph.D. at the University of California, Los Angeles. In short, Campbell was a study in either stellar time management or indefatigability — or both.

“I am a workaholic by nature,” said Campbell, “and back then, I really worked around the clock.”

Campbell’s formative, peripatetic years undoubtedly provided a blueprint for the woman she was to become — one undaunted by obstacles and adaptable to new experiences. Following a father whose career in aerospace required the family to move where the work was (including Las Cruces, N.M, Littleton, Colo.., and Lancaster, Calif.) translated to a nearly constant state of catching up in one school subject or being ahead in another. Additionally, all of the “extras” — piano or swimming or tennis — were eventually abandoned.

Campbell acknowledged the moving was hardest on her mother. But her mother was a strong woman who had, improbably, climbed out of poverty to earn her B.S. from Kansas State University (KSU) on a 4-H scholarship plus part-time work. After graduating, she married Campbell’s father, who she met at KSU while he was pursuing his master’s degree, a process that was disrupted by his U.S. Navy service during World War II. She passed on the value of frugality to Campbell and her brothers. And the expectation from both parents that Campbell would do well in school, where she excelled in math and science, was as natural as breathing.

“They absolutely gave me the tools to be independent and determined,” said Campbell.

Her years at Boulder and then in the workplace solidified her realization of and determination to take on the male-dominated engineering establishment. She  remembers a professor lamenting his inability to tell off-color jokes because of her presence, and she still bristles slightly when recalling a Kaiser mill superintendent labeling her a potential safety hazard because she would be too distracting to the men. If the intended effect of these comments was to deter or impose hierarchy, it failed miserably. 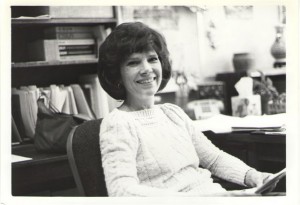 Indeed, these kinds of interactions only fueled her independent streak and spurred her to do things she believed in and cared about. During Campbell’s first few years at CSUN, she connected with other tenured women in different fields and disciplines who also sought more authority and autonomy; Campbell said this “female mafia,” as some called them, was a wonderful support system and helped her learn the ropes.

One of Campbell’s biggest challenges at CSUN was the aftermath of the 1994 Northridge earthquake, which upended her plans for a research sabbatical. Not only did the earthquake majorly disrupt campus life, but Campbell lost mountains of data she had gathered over the years about women in science and engineering. She did not skip a beat, though, resuming her teaching, some of it in her dining room. An unintended but positive outcome of the disaster was a necessary modernization and restructuring of engineering programs, which Campbell helped to facilitate.

In addition to the big-picture concerns of running a department, teaching, and participating in campus oversight, Campbell had gained a reputation as a forthright, get-it-done faculty member. One of her less-grandiose but certainly warranted missions was to have a women’s bathroom installed on every floor in their building; as at Boulder and Kaiser, women had to trek to other floors — even buildings — to find a restroom.

“She had courage,” Bekir said.

Campbell’s willingness to push boundaries and her ceaseless energy have garnered many honors and awards over the years. She has been recognized locally and nationally for her excellence as a teacher, and her generosity has benefitted a wide range of campus scholarships and programs.

Campbell’s activism inspired her to create Women in Science and Engineering (WISE), an organization supporting and mentoring women in the sciences. When Campbell interviewed for her faculty position at CSUN, she was asked if she would be interested in advising other women and encouraging more women to enter the engineering program. She was enthusiastic from the outset. What started as a typewritten brochure encouraging female science majors on campus to gather and take advantage of potential opportunities in the sciences has morphed into an endowment, the initial donor being — who else — Campbell.

Housed in the CSUN Library, where Campbell felt its influence would be broad, the WISE Endowment is managed by Mark Stover, dean of the Library, and an advisory board of about a dozen women in the fields of science, technology, engineering and mathematics (STEM).

“Bonnie is very sharp and compassionate,” said Stover, “and she has a lot of enthusiasm for women going into STEM, particularly in those fields that are underrepresented.”

The endowment sponsors recruiting events, runs career workshops, offers an annual internship with the WISE board, and awards scholarships. Recently, the endowment funded a research fellowship for a faculty member to track a decade of progress of STEM female students who had studied at and/or graduated from CSUN.

The WISE Endowment was initiated when Campbell had retired. And who better than Bonnie Campbell to embody a primary goal of the endowment — to preserve the story of women who have pioneered in science and engineering.

For more information on the Bachelor of Science in Engineering Management Technology, call (818) 677-2167 or email msem@csun.edu.