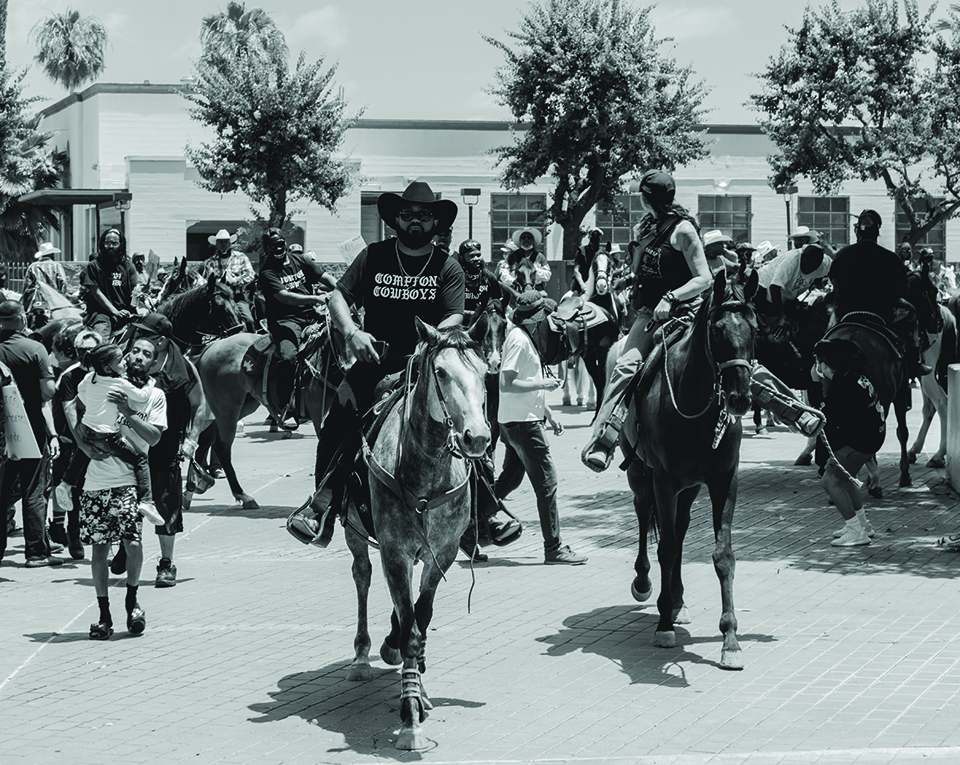 CSUN alumnus Randy Hook ’16 is impacting a community through horsemanship, mentorship and music. Photo by @DirektorGayle.

He goes by Randy Savvy, but his real name is Randy Hook. Savvy is an homage to that Slim Jim beef stick-snapping, elbow-dropping, neon spandex-wearing wrestler of yesteryear, “Macho Man” Randy Savage.

Before heading out for the day, Hook ’16 (M.A., Music Industry Administration) grabs his cowboy hat and throws on some sneakers. He’ll wear a black T-shirt with the words “Compton Cowboys” in Old English letters stamped in white across the chest.

Then, he’ll choose his ride for the day. It’s a tough choice: One is magnificent — champagne gold and shiny. Rides as smooth as a Cadillac. The other is chestnut red and has a big engine, like a hot rod. But this one is shifty and only has one speed — go.

The Cadillac’s name is Goldie and the hot rod is Fury. They’re horses.

The CSUN alumnus and the eight other members of his Compton Cowboys crew — made up of family and friends — used to turn heads when they first clip-clopped through the neighborhood in the mid-1990s.

After years of the Cowboys riding along city streets, past businesses and homes, the community got used to seeing them. Though the novelty wore off, people still smile when the Cowboys and horses pass by. They associate the Compton Cowboys with positivity.

The Compton Cowboys are a brand — featured in promotional videos and commercials and offering merchandise to people who dig their image and what the crew represents. The brand is an offshoot of Hook’s family nonprofit, the Compton Junior Posse, which relies on horses to enrich the lives of youth and honor the history of horseback riding in the community.

“Here we are, these 30-something-year-old Black guys. Normally the image of us, guys our age from Compton, you see a lot of gangsters, a lot of rappers, ballplayers. You don’t see cowboys. For people to see that different imagery, it goes a long way. It inspires people,” said Hook, 31.

Compton’s image in the late 1980s and 1990s was shaped by gang violence. Stories of crime, the gang lifestyle and racial injustice in Compton were popularized in rap music.

Compton’s beginnings, though, were far different. The first settlers in Compton arrived on horse-drawn wagons from Northern California, led by Griffeth Dickenson Compton. Legend has it that in 1888, Compton donated the land to the county under the condition that it be zoned for agricultural use. Richland Farms, a Compton neighborhood now with a lengthy agricultural and horse history, was born out of the agreement. 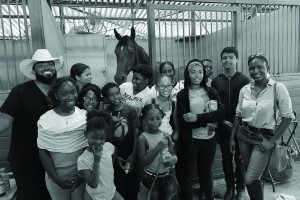 The Hook family settled in the community during the height of gang violence. Randy Hook’s father, Louis, and aunt Mayisha Akbar wanted to bring about change. They remembered how Western movies made an impact on their father and recognized Compton’s foundational history. They purchased land and started the nonprofit Compton Junior Posse in 1988 to show at-risk children living in the area an alternative to the dangerous gang lifestyle, through horseback riding.

“They knew the kids around here love horses. So, when the kids came they would be taught good things and be taught they could be the best they could. The horses were the fishing rod,” Hook said. “We just grew up being ranch kids, cowboy kids and living the cowboy lifestyle. It really saved our lives. It helped us be who we are today.”

Hook said much of the music industry business and marketing skills he learned at CSUN helped in his nonprofit work. The skills also helped in launching and managing the Compton Cowboys, which was officially formed in 2017.

“I’m really passionate about entertainment. Once I got out of grad school, I’m at home and looking at the yard and I’m thinking, how cool is it that we have all these friends and family members and we got horses in our yard? And I’m looking at my newly developed entertainment means and I was like, ‘Man, this would be a great opportunity to do something,’” Hook said.

Hook was already riding horses in the neighborhood with family and friends. Now, he and the group just needed a name for it. They came up with “Compton Cowboys,” made some T-shirts and soon got a call from beer company Guinness to feature them in a commercial.

Tommy Hilfiger, Adidas, retailer Boot Barn and Western-wear company Ariat have since featured the cowboys in marketing campaigns. The New York Times and Los Angeles Times have written stories about the group. A book has been written about them called “The Compton Cowboys: The New Generation of Cowboys in America’s Urban Heartland,” published by Harper Collins. It was nominated in February for an NAACP Image Award in the Outstanding Literary Work by a Debut Author category.

The attention helps educate the public on the considerable contributions of Black cowboys, Hook said.

“When we were slaves, a lot of the hardcore ranching work wasn’t done by the elite. It was done by the labor force. We were the ones in the field dealing with the horses, dealing with the cows,” Hook said. “Once it got to a point where we were free and the West was starting to be pioneered after the Civil War, and we started to find jobs and opportunities, all we really had was the ‘40 acres and a mule’ thing. We had land and some animals. That’s a part of who we were and what we did.”

“At some point in the later 19th century, one in four cowboys were Black. We contributed a lot to the culture,” Hook said. “We never got a chance to shine because a lot of it was taken from us, or capitalists took it over, or we just got overshadowed based on the circumstances. So what we try to do now is highlight that, bring that back, show what we’ve contributed. And just open the conversations about the importance of seeing different faces in the space and just moving forward.

“The future is here,” he said. “We intentionally don’t take contention with [that history] because what’s the point in spending time being angry about it or being frustrated about what happened already? We get excited about having these conversations. Everything we do is all about positivity.”

Amplifying Messages of Hope and Pride

With the rise of the Black Lives Matter movement in the U.S. last summer, Hook sees new opportunity to create more awareness of Black stories, Black history and Black culture. Last June, two weeks after the death of George Floyd, the Compton Cowboys rode through the streets of their hometown in a peace ride to provide healing to the community.

And Hook is using his voice to amplify more messages of hope and pride.

The CSUN music alumnus is a rapper. Last summer, he released his debut single and music video. The song was produced by arguably Compton’s most significant musical artist, legendary rapper Dr. Dre. The song, “Colorblind,” has more than 125,000 views on YouTube. He is working on an album that he hopes to release this year. 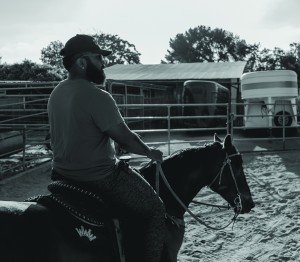 “We’re all Compton kids fighting struggles and dealing with issues and trying to come together and do something positive for our culture and change things and make our voices heard and break down barriers,” Hook said. “That’s why Compton Cowboys’ whole color scheme is black and white.”

CSUN, Hook said, has played a significant part in his life. After earning a degree in sociology from Occidental College, Hook’s love of music brought him to CSUN, where it was his desire to learn more about the business side.

“It changed my life,” he said. “My whole educational experience lined up so ideal for me. When I was going through those graduate programs, I didn’t know where I wanted to go. But everything I learned and all my resources, connections, skill sets, practices and opportunities that I had through my educational program [at CSUN] have totally contributed and made what I do now so wonderful and so efficient.”